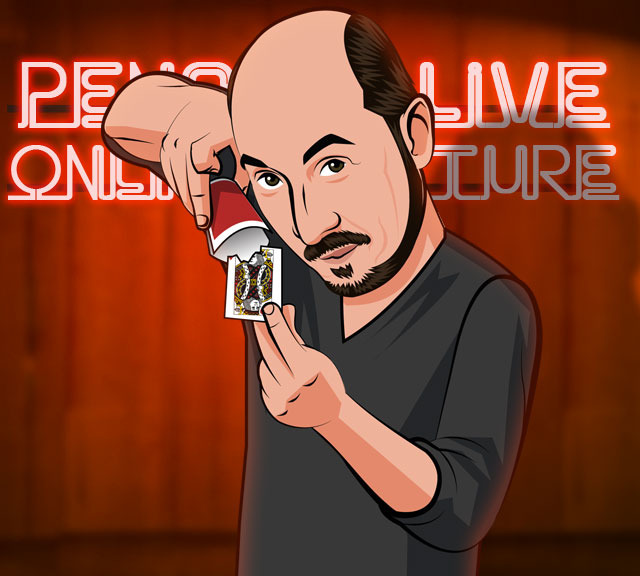 “My greatest joy with Woody’s magic is his contagious enthusiasm when performing and the genius of his explanations.” – Juan Tamariz

“I love the way Woody thinks. His magic has given the term ‘Spanish Armada’ a new meaning.” – Steve Beam

“Woody Aragon’s magic is so clever, crazy and clean – the man should be required to wear a lab coat. Need a solid kick in the brain? Go see Dr. Woody!” – Pit Hartling

This is Woody Aragon’s second Penguin Live lecture and he delivers something special you can achieve with any new, sealed deck of cards.

So, starting with a brand new deck, he gives it a few shuffles and than has any card chosen. Even under these circumstances, he’s able to immediately name the card.
Then, he has his helper name any card and he causes it to come to the top of the deck with just a wiggle of his fingers.

Next, two cards are selected and returned. After dealing the deck into two piles to insure the cards aren’t together and he knows nothing about them, he proceeds to find one. That’s pretty impressive, but the weird part is that the value of the first card indicates exactly where he’ll find the other one.

After these amazing demonstrations, it only gets better as Woody performs the classic Triumph with a major twist. At the end, the whole deck is back in new deck order.

And, Woody treats you to his three-phase, ten-card poker deal where he easily wins the first game. He also wins when the spectator can switch any cards.

And he even wins when they pick whatever cards they want and give him the rest, because… he’s blessed.

Woody also show you how you can use what you’ve learned to perform a perfect Texas Hold ‘Em demo to win with any straight flush called for.

As a bonus, he teaches you a quick packet-style trick where four jokers turn into the aces, then a joker (set aside earlier) is revealed to be the four aces while the aces have changed into a single joker.

You’ll love these tricks and the method behind them. Plus, stick around for some great stories and advice from this charming master of card magic.