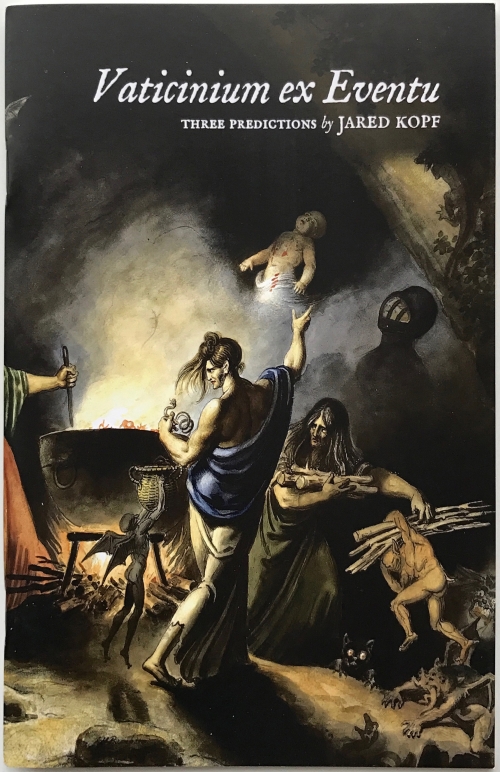 Vaticinium ex Eventu is a collection of three effects from the ingenious and unique mind of Jared Kopf. In it’s entirety, the book presents an argument for why the Object to Impossible Location plot should be framed as a prediction effect. As a result, you receive a wonderful balance of Jared’s very strong theory, and three high impact effects which put his theories into practice.

The Card in the Envelope – Under incredibly fair and open conditions, three audience members ‘create’ a playing card. Somehow, this is shown to have been known in advance when the card is missing from the deck and found in an envelope which the SPECTATOR tears open.

Steal this Trick – A mystery with the English language. Explaining your love for language, you mention that you have noted down some of your favourite sentences on the back of a business card. You proceed to have three words named by different participants. Unsurprisingly, they create a very odd sounding sentence. However, in a surprise turn of events, when you remove your business card once more, written very clearly is an exact prediction of the sentence. Not only that, it is shown to have been plagiarised from a James Joyce novel, thus raising the question, “is there really anything new under the sun?”.

The Oneiromancer’s Index – Demonstrate an uncanny ability to reveal a persons innermost fears as you predict a randomly selected person’s nightmare!

The Dark Arts Press are quickly establishing themselves as a publisher of some of the highest quality magic in the world. Their landmark publication, Classic Fantastic by Paul Vigil, set the bar high and this book follows the same high standards.

Less than 150 of these booklets have EVER been produced, or will ever be. They remain COMPLETELY EXCLUSIVE and geared toward the professional mentalist. Jared rarely publishes anything, and this represents his most complete collection to date.