Thinking The Impossible by Ramon Rioboo 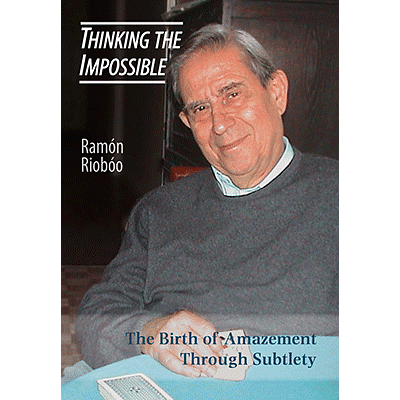 Ramón Riobóo holds a doctorate in deception. He is the 1992 recipient of the Ascanio Award and winner of the 1993 First Prize in Card Magic from the XIX National Magic Congress in Barcelona. He will yank the mental carpet from under you without your seeing him reach for it. It is only as your sense of reality falls away that you begin to understand you have been the target of a cunning structure designed to baffle the most analytical mind.

Cards are chosen and lost without the magician touching the deck – yet he finds them.

Cabalistic rituals reveal cards freely thought of, without a question being asked.

Or become cards isolated before the signing or even the selection was made.

And during all this and much more, principles and tools are taught that enable you to build amplified levels of deception into your magic. Some of these principles seem impossible, even as you are performing them. In Thinking the Impossible, Ramón Riobóo reveals with clarity and detail many of his prize secrets – secrets with which he fools both the public and his peers in magic.

When Riobóo takes a worn deck from his pocket and gives it a somewhat ham-handed mix, looking all the while a bit distracted, prepare to have everything you know about how things in the universe work shuffled into impossible conclusions.

Ramón Riobóo is a retired television director and close friend of Spain’s premier magician, Juan Tamariz. From his profession he learned about drama, concision, entertainment and focus of attention. From his friendship with Tamariz he learned how to be disarming and ruthlessly cunning. When you think you have him figured out, that is when you are the most vulnerable to his magic. No one leads people down the garden path more skillfully than Ramón Riobóo.

Riobóo’s specialty is the artful use of mathematical principles and psychological subtleties, concealed and designed to produce experiences that defy understanding. And when you least expect it, he may throw in a judicious touch of sleight-of-hand or a prepared card. The combination produces slack-jawed wonder and a sense of delight.

Among English-reading magicians, Riobóo’s work has been gaining increasing recognition from its exposure in Steve Beam’s Semi-automatic Card Tricks series. In Thinking the Impossible, he delivers everything his reputation promises: thirty-nine tricks and routines steeped in cunning and cleverness, with three lumps of psychological persuasion stirred in to make a heady brew of genuinely amazing card magic.

The White Queen once told Alice, “Sometimes I’ve believed as many as six impossible things before breakfast.” When Ramón Riobóo is done with you, you will regularly exceed her record.