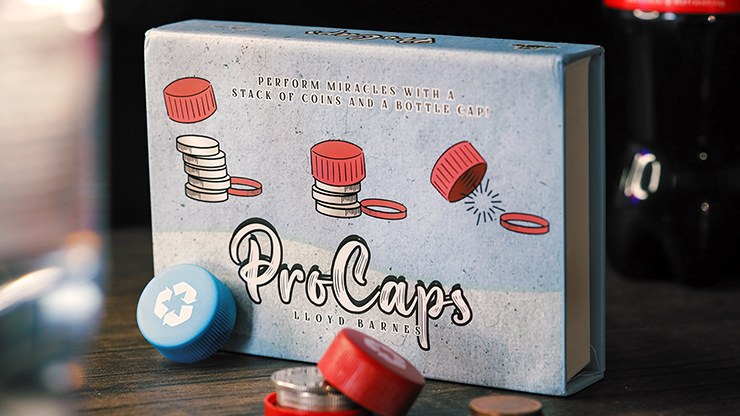 One of THE most recognizable magic props of all time just LEVELED UP for the 21st century… introducing ProCaps by Lloyd Barnes.

Known to most as Dynamic Coins or Nickels to Dimes… this classic “beginners” magic toy has remained an all time, global bestselling trick for 3 reasons:

We think the reason more magicians don’t perform it though… is because traditionally it looks like a “magic prop”.

Lloyd Barnes has taken this vintage trick and reimagined it for the modern day conjurer.

ProCaps was designed to replicate everyday bottle caps; this stealth-like set allows you to VANISH, TRANSFORM, APPEAR and TELEPORT stacks of coins with total ease, right under the spectator’s noses.

The intricate precision sizing allows for a one-size fits all design for both UK, USA and other similar sized coins (10p and Quarters respectively).

ProCaps comes with a red cap AND a blue cap so you can use both in performance – or choose to use either a “water” or “Coca Cola-styled” bottle.

The once named ‘Bang Ring’ has been organically reworked for ProCaps to look like the common plastic seal that’s broken when fresh bottles are cracked opened.

If the ProCaps set alone wasn’t enough; we’ve brought in Craig Petty (The Magic Cafe 2021 Creator of the Year) to teach you 11 brand new, NEVER BEFORE PUBLISHED routines (including multiple live and/or in studio performances) in an over 2 hours long in-depth, intricate explanation video.

With tricks designed for beginners as well as challenging professional level routines, ProCaps has something for everyone.

Whether you want a new way to vanish 4 coins as a finalé for your Matrix routine or want the perfect gift for a budding new magician… ProCaps is your answer.

They say “The classics are classics for a reason”… sometimes they just need a fresh new look.