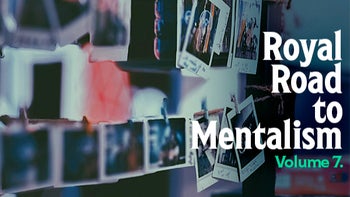 “There isn’t a magician alive that wasn’t fooled by this effect when Pete performed it to them.

…And the method is disgustingly simple.”

…AND YOU KNOW THEIR EXACT SELECTION.

The effect described above is available to learn in Volume #1 of The Royal Road to Mentalism.

It can be also done with billets or index cards – it’s not limited to just playing cards.

But to a mentalist, a card trick is a demonstration of an incredible ability – that just happens to use cards.

The methods may be the same, but the presentations are worlds apart.

This means that by knowing basic mentalism techniques, nuances and presentations, you’ll be able to take existing sleights and methods that you may already know and create limitless performance pieces out of them.

More about this 12 part series…

Over the next 12 months, we’ll be releasing 1 download per month in this series.

These effects are a re-imagining of published methods or new ways to perform classic plots.

Mark Lemon & Peter Turner have been inspired by the gold inside The Royal Road to Card Magic and have given these ideas a new mentalism twist.

As each new volume is released, the previous one will expire and be unavailable for individual purchase. So you’ll have to be quick if you want to learn just this. It won’t be sticking around forever.

Don’t worry, you can still pick up all 12 volumes in the series if you happen to miss one.