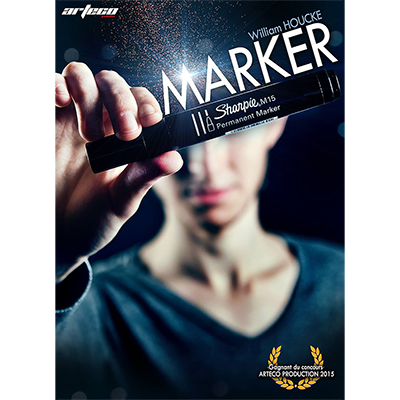 As Sébastien Calbry was in 2011, William Houcke is the winner of the 2015 Arteco Production creators contest. William is a young magician,

full of ideas and talent, who does not try to imitate but creates what does not exist.

Marker is a gimmick that allows you to change any prediction drawn on the back of a card. The possibilities are endless.

Classic routine:
After writing a prediction on the back of a card, you ask to your spectator to choose a card.
He takes the ace of hearts.
You show your prediction the six of clubs, it’s false, no problem.
A single pass of the marker and your prediction becomes instantly true.
No change and you can give the card to the spectator.
Resets in less than two minutes.

Travel:
You show a deck of cards with names of the world’s cities written on the back of each card and ask a spectator to choose a card, for example New York.
Since the beginning you have an envelope on the table with a prediction inside.
You pull out your prediction, on the back there is a question mark.
A single pass of the marker on the single mark and the name of city chosen by your spectator appears.

Bonus signed card:
Giving the card to the spectator at the end of the routine without change is already a revolution but imagine that you can change a prediction on the back of a SIGNED card.
Yes the card is signed and the prediction will turn over.
No change, the card is unique, it is signed and yet your spectator will leave with is own signed card with a changed prediction.
A surprising effect.

You will receive:
Two gimmicks in red Bicycle back
A Sharpie
A secret tool
A link to all the videos and explanations in order to make the gimmick yourself (French version but very easy to understand)