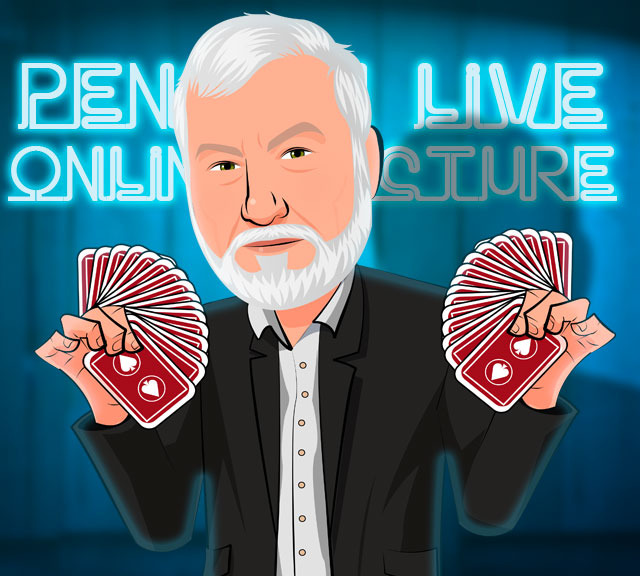 “The more I study card magic and mentalism, the more impressed I am with John Bannon. His “lean and mean” style of construction and execution inspires me. His routines are hard hitting and fun to perform.” – Jeff McBride, Las Vegas Headliner

“John Bannon is known for his refined card work and excellent book-length collections of magic. A master of eliminating moves to maximize impact, he is the creator of some of card magic’s neo-classics.” – Jared Kopf, MAGIC Magazine

“Slick. Cool. Superb on all levels. Beyond the exceptional caliber of the effects is John’s brilliant thinking behind it all.” – John Guastaferro

“You know, as I get older, my ability to impress an audience with brute sleight of hand, wanes ever so slightly with each passing day; and the thought of that inevitable day when my decline will be glaringly obvious to even the uninitiated is a source of gnawing depression. But then I remember the Bannon stuff, and I get a warm happy feeling. Thanks to John’s material, not only will they think I’m still good, they might even think I’m getting better!! Sooner or later, everyone does Bannon.” – Jack Carpenter

John’s interest in magic began as a student in Virginia Beach, Virginia, where he attended lectures by such luminaries as Vernon and Goshman. In the eighties, while in the Air Force, John moved to Washington D.C. where his magic development was nurtured by the vibrant magic community there. Also in the eighties, John began to attend conventions and his sphere of magic friends and influences continued to expand.

John moved to Chicago in 1988. In the 1990’s his first major books were published, introducing his creative work and unique writing style to the world. Impossibilia (1990) and Smoke & Mirrors (1992), were smash hits, and remain relevant and current to this day. His packet trick, Twisted Sisters (1993), continues to be one of the bestselling tricks of all time. During this period, John lectured throughout the United States, Europe and Japan—achieving a truly international reputation.

Today, John is an internationally-acclaimed creator of close-up magic—with a special emphasis on tricks with playing cards. His book, Dear Mr. Fantasy (2005) is widely hailed as one of the best magic books of the last decade. Currently, his collections High Caliber (2013), and Destination Zero (2015), quickly sold out as “must have” volumes. His recent project, Mentalissimo, is getting the same enthusiastic reception.

In the video space, around 2008, he released his highly-regarded series of “fractal” examinable packet tricks. In 2009, John teamed up with the stylish production company, Big Blind Media, to make Bullets After Dark, and in 2011, Bullet Party, both collections of card magic. In 2014, they followed up with more examinable packet tricks, the best-selling collection, Fractalicious and the innovative Sizzle. Recently, they began the epic, off-the-charts Move Zero series on John’s self-working card magic.

In real life, John is a busy lawyer. After hours, he likes to do card tricks. While John’s magic has an international presence, his personal appearances are limited. We are very pleased that he was available for this very special lecture.