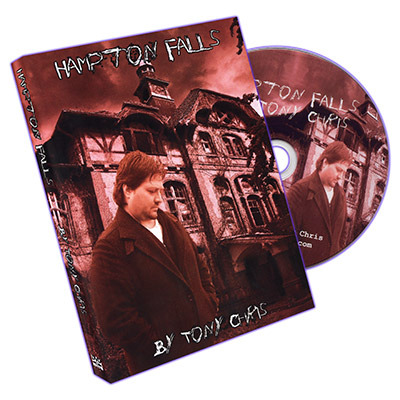 On June 18, 1969 in Hampton Falls, Massachusetts, eight high school students spent one terrifying night in an abandoned and purportedly haunted insane asylum. Not all of them survived…

Tony Chris tells their story through his captivating, macabre mental masterpiece, as eight photos of the students are displayed. A spectator is asked to separate the photos into two groups. This is done in the fairest possible manner. The spectator has a 100% FREE CHOICE of each photo and to which group to place it in. Each choice is absolutely made by the spectator without any conditions whatsoever! It is that clean. Once this has been done, the photos are turned over to reveal that the spectator has successfully separated the students who died that night from those who lived through the nightmare of the Hampton Falls haunting.

INCLUDES the custom printed cards for Hampton Falls, a printed sheet with Tony’s “word for word” dramatic, complete patter line for you to learn and an instructional DVD. Also includes access to the UNIVERSAL TEMPLATE information that allows you to customize the cards for any language in the world.