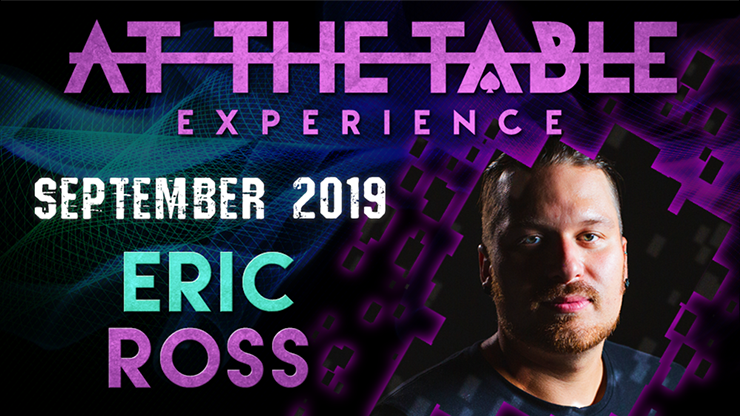 Eric Ross is one of the edgiest and most prolific creators and performers! His creative mind has landed him on some of the best platforms, including the Ellen DeGeneres show. Now fresh off a cross country tour on the Hellzapoppin Circus Sideshow Revue, Eric returns for his 2nd At The Table Lecture, eager to share some of his most requested material. He shares in detail how he safely performs some of his many classic sideshow stunts that he’s built an entire career around, as well as his go-to magic tricks perfect for workers. You do not want to miss this unique experience with Eric Ross on his 2nd At The TableLecture!

Here’s what Eric Ross will show you:

Instinct by Matt Mello: Eric’s favorite version on the classic Smash and Stab routine. After a spectator secretly hides a nail under 1 of 4 cups, Eric slams his hand down on 3 of the cups leaving the nail cup unharmed and his hand safe and sound.

Blockhead: Eric hammers a 6-inch Nail into his nose!

The Simple Transpo: Eric’s go-to two card transpo in the spectator’s hand. Uses no duplicates or gimmicks and can be performed with a borrowed shuffled deck.

Deck Tear: Using only your hands, learn how to tear a full deck of cards in half, and then into quarters. Eric will even show you how to do it with the cards still in the case AND in the cellophane!

Can Smash: Eric dents a regular can of vegetables by smashing it full force on his finger!

Kernel: After swallowing an uncooked corn kernel, Eric makes it come out of his EYE!

5 and 1 Transpo: The ultimate anytime anywhere trick that will never leave your wallet. Cause a 1-dollar bill to visually change places with a 5-dollar bill in the spectator’s hand!

Chopstick: Eric breaks a chopstick in the pit of his throat.

Special thanks to Matt Mello for allowing us to teach his incredible Russian Roulette routine, Instinct.

NOTE: May not be suitable for younger audiences. Viewer discretion is advised.