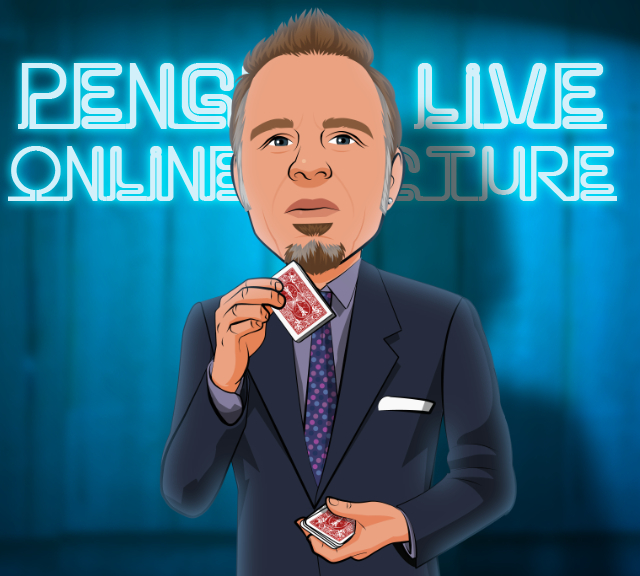 “Adam Wilber’s magic is creative and innovative. His performances are compelling, hard-hitting, and smooth. His audiences remember him!” -Paul Green

“When I think of modern magic… full of ingenuity and social relevance, I think of Adam Wilber. He has a way of combining modernity with nostalgia. New ideas with classic concepts. The results are pure brilliance, always.” -Mario The Magician

“When I think of Adam Wilber; I immediately think technical mastery, creativity, and the pursuit of developing truly entertaining pieces of wonder. Having seen the contents of this lecture, I can see that my initial thought has been backed up ten-fold with the addition of extreme generosity. We all love to learn tricks, routines, and showpieces; there’s a lot of that here, but what excites me more is the amount of gold that surrounds the effects.
When Adam talks, I listen and you should too. This release is destined to make its way into the top ten Penguin Live Lectures of all time, so it’s certainly not one to miss!” -Dee Christopher

“If you like visual, innovative, and entertaining magic, look no further than Adam Wilber. He’s a creative beast!” -John Guastaferro

“Adam Wilber is a creative force to be reckoned with in our industry. His out of the box thinking is beyond inspiring and his creations are ALWAYS genius! Beyond that he is a performer who gives 110% every time he steps in front of an audience. Adam is a true inspiration in every sense of that word.” -Joel Meyers

“Adam has enormous skill and creativity, plus his attention to detail is legendary. But what I admire most is his rare and comprehensive perspective on the art of performing magic. Adam is just so experienced and has explored this stuff from so many angles, that his perspective is so valuable.” -Jay Sankey

“Adam Wilber is part of a very rare breed of magicians who can do it all. He’s a great performer, inventor and producer. His magic is hard hitting, commercial and practical! Do yourself a favor and learn everything you can from this man!” -Richard Sanders

“Adam is a modern master. He is what every magician should aspire to be- an inventor, a performer, and an excellent orator. He constantly amazes me with what comes out of his mind and his ability to turn ideas into reality. He is an absolute beast.” -Dan White

Virtual Opener- Adam goes over the exact hardware and software he uses to perform high quality multi cam virtual shows. You’ll get a PDF detailing how you can get the same set up for under $750. This studio set up focuses on ease of use for the solo performer.

Disposable Deck Opener- A quick and easy way to start your virtual show off with a bang. Three decks are sat on the close-up mat. The spectator decides which deck to use by eliminating two of the three. Upon opening the decks it seems that only the one picked actually contains playing cards.

A Magicians Warm Up- An Ace Assembly where the aces appear one at a time in surprising fashion. As a kicker the backs change color.

The Shy Cork- A fun and quirky version of the Cylinder and Coins routine where the cork animates as if it has a life of its own.

Splits- One object melts into another in a must-see kind of manner. This is the splitting effect that went viral in 2019. This really does look like CGI in real life.

Split Bill ATM- A single bill is freely shown on both sides and in an instant you tear the bill in half to transform the pieces into a handful of bills.

Wild Bills- The wild card plot taken to new heights by adapting it to bills. A group of $1’s is shown with a single $5. One at a time the $1’s change into $5’s with a crazy visual ending that changes the last $1’s into $5’s with nothing more than the way of your hand.

What, Where, When, Why- A fun packet trick with an interesting script and an impossible prediction. You show the spectator four playing cards that come out of a wallet. You ask them to look them over and think of just one. You show them that you had predicted this exact outcome by revealing your prediction in the wallet in a very surprising manner.

How to Structure a Show- Adam goes into detail on how to connect with your audience and maintain audience engagement from start to finish. He shows how to lay this groundwork even before performing your first trick.

I Paint Dreams- A stunning showpiece. A blank deck gets painted into existence in a beautiful 3 phase routine. You show a deck of blank cards very fairly and cleanly. With the stroke of a paintbrush a single card appears then disappears with the wave of your hand. Then the deck is split into four piles, each time you split the deck a new card magically appears out of the blank deck. Finally, the entire deck prints itself, front and back, and with one more wave of the hand the entire deck goes back to blank and not a single printed card can be found anywhere.

In Case of Emergency- Adam explains one of his favorite creations and breaks down the creative development process in an easy to understand and replicate format. You’ll also receive a PDF that outlines this process in detail for you to reference during your own creative endeavors.

Grandfather’s Top- A little toy spinning top floats from hand to hand in a mesmerizing manner. Then as it floats in midair with the wave of a hand it vanishes only to reappear in the box it came from.

When Adam was six years old, he showed his first magic trick to his father and, at that moment, he knew that this was what he wanted to do for the rest of his life. The look of wonder and joy on his dad’s face triggered something in Adam that made him know, even at such a young age, that he was born to create, and perform, magic.

Devoting not just his childhood, but his entire life, to the art of magic and mentalism, Adam became the GM of one of the most successful magic stores of all time, www.Ellusionist.com and went on to create some of the all-time best selling magic products such as PYRO & Decibel. Adam now runs his own magic company Vulpine Creations where he continues to release his favorite magic props and routines to the community.

Adam has garnered over 15 million views on YouTube with spots on Discovery Channel, CW and SyFy, while also performing for companies such as Google, Hilton Hotels, NCIS, Intel and BMW.

Adam performs corporate and private entertainment all over the country. While not traveling the country performing, lecturing, and keynote speaking on creativity, design, and imagination; Adam can be found outside in nature with his two children and friends