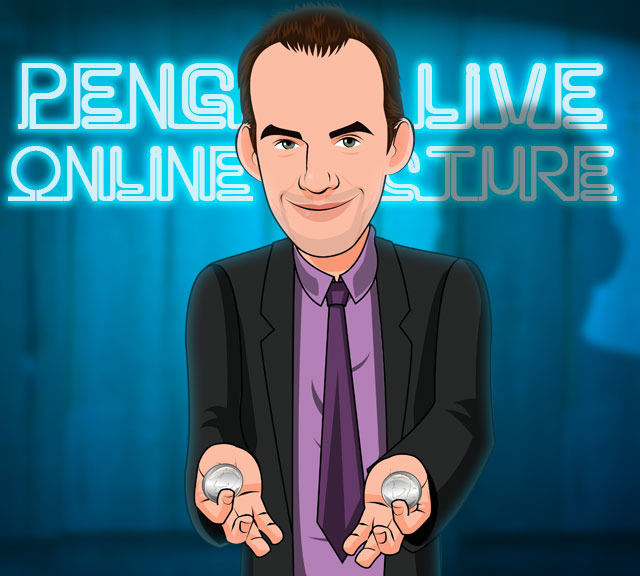 “Will Houstoun’s lecture provided an immensely satisfying evening. Like no other lecture I’ve ever seen, it was an original mix of eye popping sleight of hand, witty tales of literary sleuthing and amusing historical anecdotes. Having had the experience once I now want more lectures just like it but fear that wish is unlikely to be granted until Will’s return to these parts.” – Ernest Earick

“Will presents a fascinating historical discovery in a witty, wise, and magic-filled way. I was captivated, from start to finish.” – Simon Aronson

“Will created one of my most used tricks and my go-to effect if someone stops me and asks to see something.” – Dynamo

“Will is a natural communicator with bags of content to match the best. You will think, learn, laugh, reconsider and be moved.” – John Archer

“Smooth as silk… I loved your three fly and all your little touches. One of the best I’ve witnessed. Your shadow coins move so effortlessly and your attention to detail is unmatched.” – Dean Dill

Coin 0.5 – Will’s handling of the modern classic, Three Fly, makes some significant structural changes to the routine and features some eye popping moments as well as novel sleight of hand.

Guesstimation – A gambling themed production of the four Aces this will convince any audience that you really do have superhuman skills with a pack of card.

Minimal Assembly – This sequence offers a dramatic rethinking of the classic Ace assembly along with some startling and visual magic.

18th Century Transposition – Two cards transpose under the most impossible conditions in this two century old gem that Will discovered in a lost manuscript from The Magic Circle’s collection.

Impossible Aces – Until you learn the techniques that Will teaches for this Ace production you would truly think it is impossible. The deck can be examined and shuffled as much as a spectator wants yet you can quickly and stylishly locate and produce the four Aces.

GK Aces – In this fast-paced sequence your audience will be astonished by the magic you can perform with four Aces and a selection … and then startled by the kicker ending.

Bouncing Shadows – This is Will’s handling of one of the most beautiful tricks in coin magic. It has been carefully structured to enhance the magical impact and Willteaches all the little details that turn it from a trick into magic.

Order and Chaos – This is the effect that Will has closed all his shows with, including dozens of appearances at The Magic Circle and The Magic Castle, for the last few years. When you see it you will understand why!

In addition to the tricks Will offers a bonus selection of moves including a novel coin vanish, an alternative loading technique for the Cups and Balls and a hands-off force and peak. He also shares some of his research into the history of magic, his thoughts on performance and innumerable other hints and tips on his approach to conjuring.

Will Houstoun is an international award winning magician who specialises in consultancy for media and advertising as well as instruction on both the technical and historic aspects of magic. He has a PhD in the history of magical education, supervised by Dame Marina Warner and based on a study of Professor Hoffmann, a conjurer and author from the late-nineteenth and early-twentieth century, who had a huge influence on magicians’ and the public’s understanding of conjuring. Will has written and published two books on magic as well as numerous instructional DVDs and downloads that are available in his shop). He also edits The Magic Circle’s 105 year old magazine, The Magic Circular, The Young Magicians Club magazine, Secrets, and Half Half Man’s journal, Quarterly.

As a consultant Will has provided technical and historical information for film, television and radio. Will has also used his magical knowledge to help a diverse range of other organisations including The Wellcome Trust, KPMG, The Victoria and Albert Museum, Grolsch and The Royal Shakespeare Company.

Will is a winner of both The European Magic Championships and The Magic Circle Close-up Magician of the Year 2015 as well as holding a Literary Fellowship from The Academy of Magical Arts in Los Angeles. He has Lectured for magic societies around the world, including The Magic Circle (London) and The Magic Castle (Los Angeles), as well as at conventions like The Los Angeles Conference on Magic History, The International Puzzle Party (Prague), The Las Vegas Magic Invitational, FFFF and The London Festival of Magic. Will also offers private tuition to magicians of all ages and levels of experience as well as leading lessons for groups of children and teenagers. As part of his teaching work he is proud to be involved with Breathe Magic, an innovative NHS-funded programme that uses magic as a form of therapy for patient groups with mental and physical disabilities.