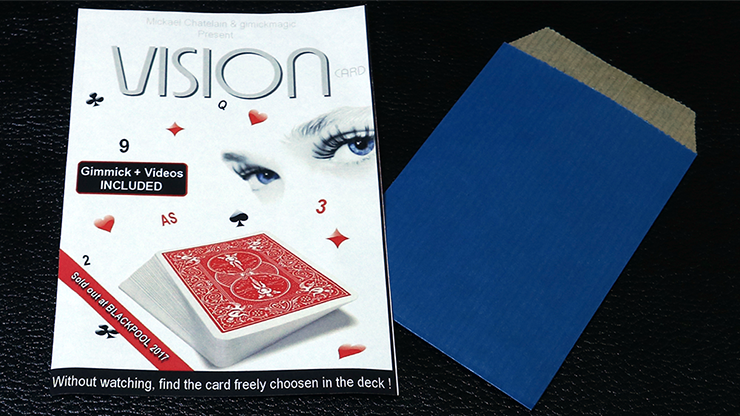 “I’ve been doing Vision in my lectures for several years. At the last Blackpool Convention in February, I fooled more than a few well-known magicians and mentalists with this gimmick! Once you have the secret, many effects are possible! I’ll give you two, but I’m sure you’ll find many others on your own!”
– Mickael Chatelain

Hand your deck of cards to a spectator, and ask him to exam and shuffle it.
It’s a standard deck, all the cards are different.
Take back the cards…

The cards are face down in your hands. Ribbon spread the cards and ask a spectator to touch any card – really, ANY card.
At this point, no one can know the identity of the card as the deck has been shuffled and the cards are all still face down.
Close your eyes or turn your head so that you’ll see NOTHING!
Show your spectator the card he just touched and replace it in the deck in its original place, changing nothing, manipulating nothing.
The deck is immediately placed in the center of the table.

Point out that in such conditions, it would seem totally impossible that you could discover the chosen card.
Concentrate for a few seconds before writing the name of the card on a piece of paper.
As you turn over the paper, invite the spectator to name the card that he had simply touched. It’s impossible, but you have divined the correct card!

How is this possible with a freely-chosen card from an ordinary deck shuffled by a spectator? You’ve seen NOTHING, yet you were able to name the chosen card!
Those are questions no one will be able to answer!

As above, show the deck – 52 different cards.
The deck is thoroughly shuffled! No one can know the order of the cards, and that’s the truth!
Take the deck face down in your hand and explain to your spectator a technique perfected by professional card sharks – it’s called “The Touch.”
It’s easy for a cheat to recognize cards by touch without even looking at them. Impossible, no?
Your spectators will want to see…

Invite one or more spectators to name any card.
Let’s say they name the eight of clubs.
No one can know exactly where the eight of clubs is in the deck, as it has been thoroughly shuffled and the deck is still face down in your hand.
Take the first card without turning it over. You can positively state that it is not the eight of clubs.
Continuing taking cards one by one, face down, and place them on the table. After a few seconds, you stop at one card.
Explain that you are 100% certain that the card you hold at your fingertips is indeed the eight of clubs.

Your spectator will be eager to see it, as this seems totally impossible. You then turn over the card you’re holding… it is indeed the eight of clubs!
The card is freely named by the spectator. You show that all the cards are different.

This is an experiment your spectators will never forget!

With Vision, you’ll be able to perform the above two effects and more – you’ll truly amaze your audience