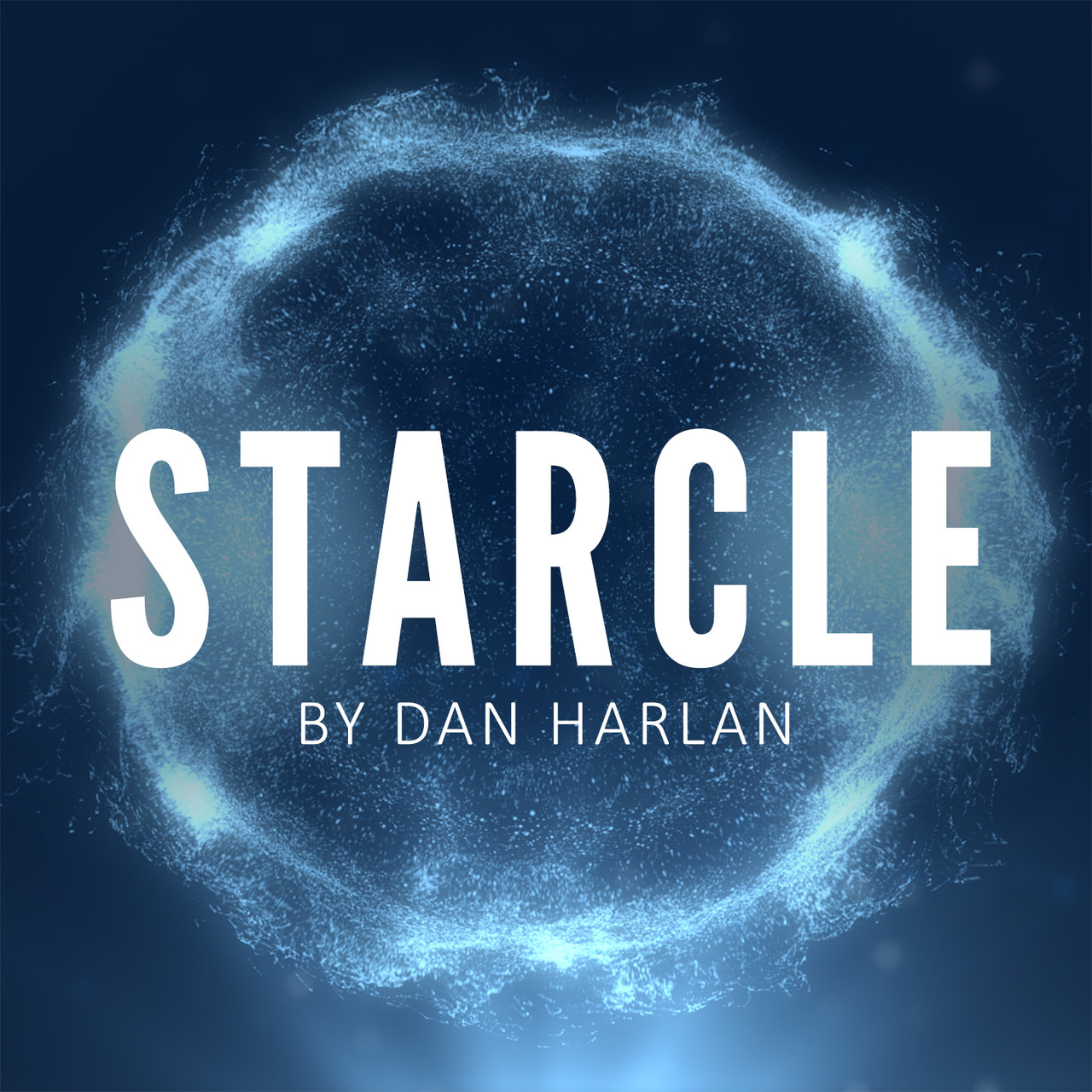 “Yesterday I got married, and in the middle of my vows I performed your amazing effect… Starcle. My bride’s favorite symbol is the star and the circle has special meaning to me. I want to thank you for creating this effect and for making this special moment in my life even more powerful.” –Max Kovins

“Starcle is Dan Harlan’s most baffling and beautiful gift to magicians and to magic.” –Bill Abbott

“I have been doing this now for many years, it’s probably the strongest trick you can do with just a paper napkin! Impromptu magic doesn’t get any better than this!” –Gary Jones

“I learned Starcle at my very first magic convention. It’s still an amazing way to create magic at a moment’s notice!” –Marcus Eddie

“At a time when magicians are looking for the next do-it-all-for-you prop, Dan Harlan re-introduces Starcle, an incredible piece of impromptu magical theatre using nothing more than a humble paper napkin and basic skills.” –Jon Allen

“Starcle is a pack-small, play anywhere masterpiece. I close my show with it.” –Bill Cook

“Dan Harlan’s Starcle is a work of genius and a modern impromptu classic. It can be done up close and on stage and leaves the audience with a memory and a souvenir. The possible presentations are limited only by your imagination.” –Richard Hatch

“Dan Harlan’s Starcle creates a sense of wonder, it is truly magical. Love it!” –TC Tahoe

“Starcle is baffling; Starcle is impromptu; Starcle can be performed anywhere; Starcle is a great giveaway; Starcle is theatre… but more than any of that, Starcle has HEART. If you want to make a connection with your audience, learn STARCLE!” –Tim Hannig

“I use it in the restaurants all the time. I can attest to its strength. 5 restaurants 5 nights a week. That’s a lot of stars being given out. Beautiful piece of astonishment that they get to keep.” –Shaun Robison

“Starcle is a wonderful performance piece that creates a memorable moment and makes your audience feel special. I love it, I use it, I highly recommend it.” –Patrick Redford

“Starcle was one of the first shape-shifting effects I ever learned! The clever thinking behind this visual piece of magic influenced my own creations as much as anything else out there!” –Jonathan Friedman

“I remember Dan presenting this to the group at the F.F.F.F. convention and I was immediately taken with the improvisational quality about it. I immediately went to work to create a memorable, meaningful presentation. I shared my presentation with Dan who published it in one of the last issues of the Minotaur and it made me proud. I still perform this impromptu miracle everywhere. It is the best close-up, non-card trick on the planet. Thank you, Dan for this miracle.” –Scott Wells

“Starcle is the MOST practical, commercial, and adaptable piece of theater. It is a simple effect with an unbelievable ability to move audience’s emotions. That’s why I always pack some napkins in my case.” –Christopher Berry

“Starcle is one of the best effects ever invented!” –John Tudor

“I use Starcle in every one of my shows. It works on the street, in the bar, on the stage or your living room. It easily adapts to your style and your setting. It is my go to trick when someone says ‘show me something.’” –Ryan Parsons

“With Starcle, you have on your hands an impromptu effect using just your imagination! Your public will love it!” –Pascal Marc

“It’s the nicest trick I have ever met. It built me up and then surprised me with an awesome finale.” –Chastain Criswell

“Perfectly impromptu, spontaneous magic. It packs small (sometimes nothing to pack) and plays big. An effect that is magical in and of itself. You can perform it anytime, anywhere.” –Jason Purdy

“A classic that has withstood the test of time from one of magic’s greatest minds. The part I love is they get to finish tearing the napkin and they hold onto the piece they removed. The magic truly happens in their hands! Great for impromptu magic and packs super small and can be done on the largest stage.” –Michael Night

“Starcle is an amazing piece of impromptu magic. It’s memorable and timeless, just like the moon and the stars!” –Michael Kaminskas

“I remember when I first learned Starcle. It seemed too good to be true – completely impromptu, completely charming, and biodegradable to boot! I have used this super practical piece of entertainment for years, both close-up and even in stand-up settings. It’s great for a planned set, but it’s also great to have Starcle in reserve for emergencies in case props or luggage are lost.” –Joe M. Turner

“One of the best effects that can be done with a napkin, full of story & emotion, bar none!” –Roger Rogue Quan

“Starcle is among the most amazing pieces of magic you will ever perform, and all it requires is a napkin. It has a way to create an emotional connection with your audiences.” –Bobby Warren

“Starcle has been in my working repertoire for the last two decades, and it is not going anywhere. It is a reliable and work tested piece that ALWAYS elicits a powerful reaction. You cannot go wrong with this effect.” –Donavon Powell

“Dai Vernon said ‘You must have an emotional hook.’ Starcle gives you one. It’s a heartwarming little trick, and performed with a single napkin. What more could you ask for? Brilliant Dan!” –Jason McCully

“I have been performing Starcle since Dan taught it to me in Jeff McBride’s living room around 2000.. Awesome effect that can be performed most anywhere. No angle issues. The story, and the telling of the story really is the key to making this effect something more than just a trick. I have used it everywhere from hospital shows to the Magic Castle. It’s a must for any performing magician’s repertoire. The fact that you can leave a piece of magic with the observer is just a bonus.” –Timothy Shegitz

“Magic is all about marking the moment and connecting different thoughts at the same time and that’s what Starcle is all about.” –Manuelito Pio Roda – Raven of Paradigm Deceivers

“After thousands of performances I can say Dan Harlan invented the perfect magic trick.” –Matt Roberts

“I have used Starcle to close my stage show for over 25 years. It is a beautiful piece of magic that uses an everyday object. It has a comedy aspect with a dramatic finish. I’ve had audience volunteers that have kept the STAR for years because of the impact that moment on stage had on them. Thank you Dan for creating this.” –Dal Sanders

“I love Starcle. It’s one of those effect that catches you off guard and delivers on all fronts. I still use it to this day after years of performing it. It never gets old.” –Steve Knight

“Starcle is one of my favorite effects. Can be done impromptu. Starts and ends clean. Gets a great audience response. I do this a lot.” –Paul Case

“This has been my emotional closer for more than a decade. I have performed it close up and on stage, all around the world. Magicians talk about creating wonder. This is the routine that does it.” –Cory Haines

“If you’re looking for an effect that is deeply magical, requires next to nothing and can play for an audience of one or a thousand, then Starcle will be love at first sight.” –Jacob Smith

“I used your Starcle routine for my restaurant table-hopping for years and always got a great reaction. Thanks Dan.” –John Ward

“Starcle is one of those anytime, anyplace effect that is pure magical entertainment.” –Gavin DeMersseman

“A great impromptu wonder or a humble illusion? Starcle is both! It’s an honest and innocent miracle to an audience when presented the right way using nothing more than a paper napkin.” –Jonas Karlsson

“Starcle is an impromptu miracle that hits hard with everyone I have shown it to. Everyone loves seeing it and I love performing it.” –Ronald Hoole

“One of my favorite effects of all time. It makes me smile even just to think about it.” –Eric Benton

“The appearance of a star in your spectator’s hand is always magical! Starcle never fails to amaze and delight!” –Debbie Carroll

“I don’t want to say anything nice. But just because I want it for myself. I learned it years ago and it’s too good… like, too good. One of the most beautiful pieces of magic.” –Luiz Castro

“I’ve done this in bars and restaurants. I can’t recommend it highly enough for those venues (or just about any other, too!).” –Peter Marucci

“Starcle has become one of the cornerstones of my act. I have been able to craft a story that allows me to share a little about myself with my audience and present the star as a gift to one participant. It has become an incredibly powerful and important piece of who I am and what I do. I wanted to reach out to Dan and say thank you for releasing Starcle, thank you for this piece of real magic.” –Chris Zaccara

“It’s my go to effect whenever somebody wants proof I’m a magician.” –Nathan Ernest

“Dreamed of, and then designed by, a worker who understands how the impossible can work.” –Robert Lavers