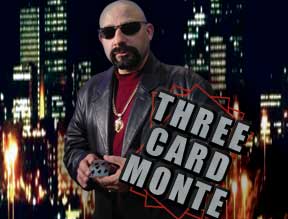 LISTEN UP, SUCKER! This is one of the oldest cons in American history. Sal Piacente (the Hitman of Magic) stars in this in-your-face DVD on the THREE CARD MONTE. You’ll learn the game, the moves, and the psychology behind one of Magic’s favorite close-up routines and one of the most dangerous games on the street… Knowledge is Power!

DVD Features
Kick off your THREE CARD MONTE experience by watching a personal demonstration by Sal Piacente. Then learn the history of the game. After you have watched the preparation and handling of the cards, you are ready to watch Sal in the studio and out on the streets!

PLUS, take an in-depth look at the anatomy of the game.