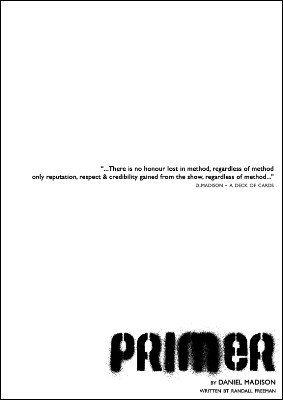 Primer is a trick deck that has existed in Daniel Madison’s repertoire for almost a decade. At first glance one may judge the deck as a ‘beginners prop’ but after using it I can say that this is a most powerful tool when performing. It achieves things, which in fairness can be achieved with a normal (modified) deck, but what’s amazing about it is that it eliminates the sleights that at some point some of us could do without.

The deck is spread face-down on the surface and a card is freely selected by a spectator as the performer turns away. The performer instantly knows which card has been selected.

Primer Reset
The top card is placed on the bottom of the deck and with no sleights the card instantly resets to the top of the deck.

Primer Out
The deck is placed inside the box and the spectator is asked to insert the card in the middle of the deck, then close the box. The box is snatched from the spectator’s grip where their selected card appears in their hand.

Primer Under
The spectator’s selected card instantly appears under a close-by object.

Primer Breach
The selected card is placed on top of the deck face-up and the deck held under a glass table. The performer waves his hand over the table and the selected card is seen to pass up through the glass. The performer waves his hand over one more time and the card is seen to fall through the glass back to the top of the deck.

Primer Prediction
An envelope on the table is opened to reveal a playing card prediction…the exact match of the spectators freely selected card.

Primer Mr. Writer
Two cards are in use. The performer writes the value of each one on their backs, he then instantly causes the markings to switch places.

Primer Double
Two spectators each choose a card from the deck and do not show each others cards. Both cards are returned to different places in the deck. The performer takes two cards and places them between the spectators face down stating that these will be the selected cards. On his count he asks the spectators to name out loud the card they chose to which the same card is named. The two cards on the table are then turned over to reveal on card, the named card.

Primer Flush
After vanishing from the deck, the freely selected card is found in the spectators pocket.