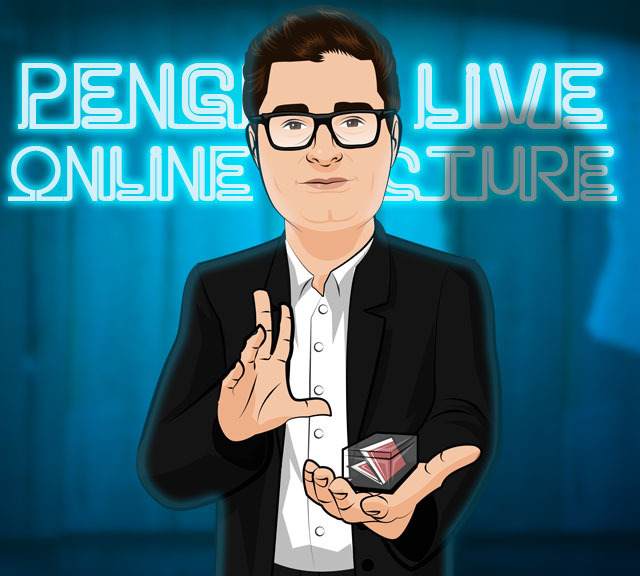 “You are a gift to the magic community.” – Mat Franco (winner of America’s Got Talent)

“João Miranda has very clever ideas, but the most important thing is that he wants to share with you his love for magic, and you can find that in every single product João produces.” – Dani Ortiz

“I have been using the Lynx Blackboard with huge success in my shows.” – Darcy Oake

A professional magician, creator and lecturer,  João Miranda is known for his creations in magic. With more than 20 inventions, like the Lynx Blackboard, Vision Box and the Smoke Watch, his creations have been performed by David Copperfield, Lu Chen, Derren Brown, and many other world’s top magicians in both television and live shows.

Classical aces The spectator finds the aces after several spectators shuffle the deck. Totally impromptu and a great opener.

Twisting the Aces (With a Twist) This is João Miranda’s version of the Dai Vernon Classic. In this effect, the 4 aces turn face down, one at time, in a very magical way. At the end, the 4 aces transform into the spectator’s freely selected four-of-a-kind.

Vision Box The cleanest signed card to impossible location, where the audience
really sees the card being removed from the box, without any shuttle passes or
suspicious moves.

Signed bill in orange A spectator signed bill appears inside a freely chosen Orange that is on top of the table from the beginning. A magician fooler!

Rejoined A card is chosen and signed at the back by the spectator and the magician. Without any cover or special moves the signed halves are restored BACKWARDS and PIVOTED against each other, making of the restored card a wonderful souvenir that the spectators will never forget.

Untouched A amazing two deck trick where a chosen card appears in a freely
chosen position, but in a deck that is untouched by the magician (with permission of Dani Daortiz).

Mental Pen what the spectator marks with a Sharpie, matches the magician’s
prediction. This is made possible due to the diabolical and very special gimmick that is explained in full detail.

Sketch A drawing comes to life and transforms it into the spectator’s selected
card. This is visual and eye popping magic.

Knife thru coat In this effect, a knife passes through the spectator’s jacket after
being covered by a sheet of newspaper. The jacket is 100% intact at the end, and
everything can be examined. No gimmicks are used.

Smoke watch This is problably João´s most well known invention, which has been performed by David Copperfield on TV. João shares the secrets on how he
accomplished what is called the best smoke ever created for the professional
magician.

Vanishing deck (with smoke) In this effect, the whole deck transforms into the
audience’s freely selected card, with a cloud of smoke in the mix. This is the opening effect that João Miranda uses at the beginning of his parlor shows. Flashy and very visual magic.

Haunted box A spectator is invited to select any card from the deck and sign its
face. The card is then placed anywhere in the deck by the spectator. This is 100%
FREE choice. The spectator then mixes the cards and is asked to deal cards, one by one, into the box. Suddenly the lid of the box SLAMS SHUT, as if telling the spectator to stop dealing. The magician asks the spectator to turn over the card they are holding in their hand…. it is the signed card!

Besides all of this effects João shares for the first time the following magic theory:
1 – How to be a successful magician
2 – The secrets to get more shows
3 – Branding is everything!
4 – How to promote yourself
5 – 3D printing applied to magic
6 – How to create new magic
7 – Team

This lecture will not only teach you a lot of outside the box original effects, but will
make you a BETTER magician!