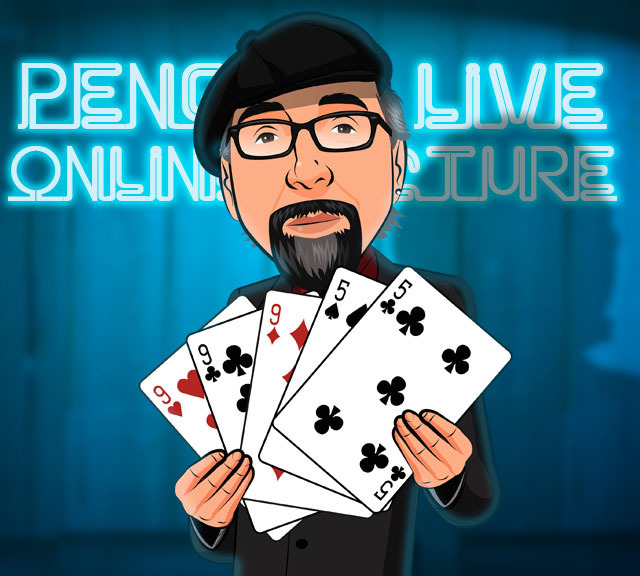 “A remarkable performer and the epitome of skill…” — Dai Vernon

“I never saw anything like that! That was a sick trick!” — Annie

“You’re freakin’ me out.” — Matt Lauer, The Today Show

This new lecture by Jamy Ian Swiss will cover the gamut of close-up sleight-of-hand magic. This lecture is absolutely full of amazing card magic, from original card-in-impossible location plots (and a fresh new handling of the Card on Ceiling); to apparent displays of extraordinary skill that don’t demand as much as they appear; and a simple but mystifying and commercial memorized deck routine.

Then comes the non-card magic; including an impromptu cup-and-ball routine with an original and amazing new climax; a practical mentalism routine that turns any peek into an engaging four-effect routine; and coin magic that includes a lesson in pure misdirection, and an amazing no-gaff vanish of four coins.

A Peculiarly Strong Card Trick: a perennial favorite where a signed card is found folded inside a container of breath mints and that ends clean. This solution is unexpected, organic, and minty-fresh.

Self-Contained Card on Ceiling: a practical method to carry and access all the items you need to perform one of the strongest card tricks in the world.

SandSwitch: a two-phase “isolated sandwich” routine in which the first selection appears between two queens, and then, while on the table at a distance, the sandwiched card changes into the second selection.

Stabbed in the Sandwich: a card tossed into the air is caught between two selections. The feat of skill is repeated with a tabled deck and surprisingly accurate results.

Premonition Redux: a clever combination of mind and moves… any card named is discovered to be missing from the deck, only to be found hidden in the card case.

Me-Fly: no gimmick version of hand-to-hand coins relying on well-choreographed moments of misdirection and ending clean.

Solid Glass: an impromptu cup-and-ball routine with an original and amazing new climax.

According to the post-modern magic duo, Penn & Teller, Jamy Ian Swiss is “James Bond with a deck of cards for a pistol!” Swiss has appeared internationally for presenters ranging from Fortune 500 companies to the Smithsonian Institution. His U.S. television appearances include CBS “48 Hours,” PBS “Nova,” “The Today Show,” and repeat appearances on “The Late, Late Show with Craig Ferguson.”

Internationally renowned for his skills as a close-up magician, Swiss has also performed his stage show of mind-reading and mentalism, “Heavy Mental,” for audiences of thousands across the United States. As a speaker, Swiss has addressed subjects including creativity, risk management, information design, user experience and other aspects of corporate and creative concern to firms as diverse as Publicis, Schlumberger, Evernote, Adobe, Intuit, Evernote, Electronic Arts, Shufflemaster and more; and also serves as on-stage host for a diverse range of business conferences.

Swiss was the book reviewer for “Genii” magazine for 18 years, and is the author of several books including “The Art of Magic” (the companion to the PBS documentary); two collections of essays: “Devious Standards” and “Shattering Illusions”; and he collaborated with Edward Tufte on a chapter in the book “Visual Explanations.” He has produced and written for television including Penn & Teller’s “Sin City Spectacular” series, and Marco Tempest’s “The Virtual Magician;” and he is a co-producer of New York’s longest-running Off-Broadway magic show, “Monday Night Magic,” now in its 18th consecutive year.

A regular performer at the Magic Castle since 1987, Swiss has also lectured to magicians in more than 30 states and 13 countries. A renowned “skeptic” and pro-science advocate and activist, Swiss is a founder of the National Capital Area Skeptics [www.ncas.org], a founder of the New York City Skeptics [www.nycs.org]; has served as a Fellow of the James Randi Educational Foundation [randi.org]; and is a co-producer and on-stage host of the annual New England Conference on Science and Skepticism [NECSScon.org] in New York City.

In a lengthy profile, “New Yorker” magazine declared, “Swiss is widely thought to have one of the most masterly sleight-of-hand techniques in the world today!”