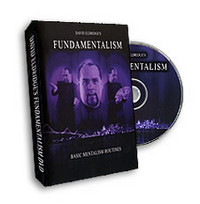 Fundamentalism, the complete mentalism show of David Eldridge all on one DVD. All the classics are here, including some you’ve probably never heard about. The props fit nicely in your pockets and the routines can be performed just about anywhere.