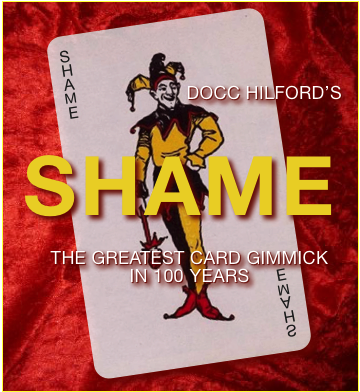 SHAME is a type of gimmick, that when specially applied to a deck of cards, enables you to…
That’s it!
Included in the SHAME package is…
12 SHAME  Tricks:
With SHAME There is ABSOLUTELY NO…
Shiners or reflectors,
Cut outs, windows or holes,
Daub or slick wax,
Sticky or Rough/Smooth,
Specially printed cards,
Duplicate cards,
Stripped or trimmed cards,
Short, wide, long, or thick cards,
Markings or anything to read,
Secret lifting, tilting or edge glimpsing,
Cuts, flaps, threads or hairs,
Nothing written or carbons,
Stooges or confederates,
Sleight of hand!
SHAME Features:
All 52 cards and a Joker are used,
All cards are single cards,
All cards are from the same, regulation deck,
Any card chosen is a FREE CHOICE,
Mentalist can display normal deck any time,
Deck can be spread and shown any time,
Spectator can examine cards,
Spectators can shuffle all the cards,
Can be used with any brand deck, even special back designs,
You can remove SHAME gimmick and use as a 100% normal deck,
When the gimmick reveals the chosen card, it’s as big and easy to get as handshake.
The ‘Reveal’ is secret and almost instantaneous.
SHAME’S “Reveal” is so clean that a spectator can read it, and not know how they did it!
Remember, SHAME reveals chosen cards, even if they’re only thought about!!!
PLUS, using the ‘Reveal’ in reverse, SHAME can make a subject THINK of any card!
SHAME…
You Get a full MP4 Video file – with over 90 minutes of demonstrations.
12 different and original effects are explained.
HUNDREDS of effects are possible with SHAME.
Once you learn SHAME, card mentalism will be FUN!