Card at Any Number by Justin Miller 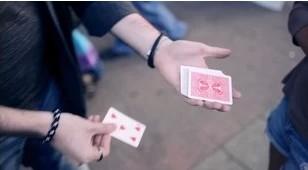 The Card at Any Number plot is a classic of magic, usually involving complex stacks, stooges, multiple decks or limits on the card or number named. But Justin Miller doesn’t like complex.

A card is named by the spectator and withdrawn from the deck. With the chosen card no longer in play, it’s up to the spectator to find it’s pair – by naming the position – with a 1 in the 51 chance of being correct.

The cards are dealt one by one into the spectator’s hand until their number is reached. The final card is placed aside, with the original chosen card. Suspense is built as the previous few cards are shown to all be different – one more or one less card would have resulted in another random card.

Finally, the numbered card is turned over – revealing the twin of the chosen card. A One in Fifty One Chance.

Freeing the effect of the distractions and pitfalls of many of its predecessors, Justin Miller gets straight to the point.

This is Justin Miller. This is Card at Any Number.