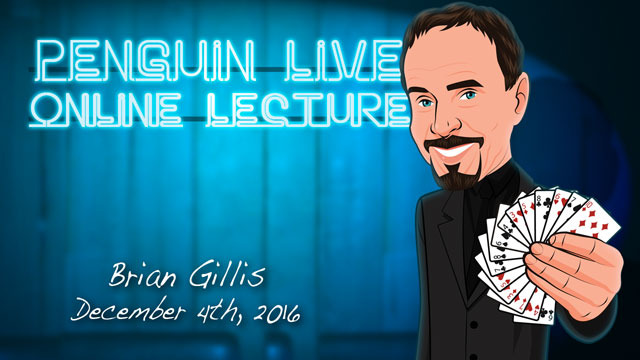 “As a magician who wants high impact from their magic I think you need to always be a few steps ahead of them. When you see Brian work you can tell he’s ahead of the audience by a mile. Or at least you can tell after he’s amazed everyone in the room including yourself” – Jon Armstrong

“Brian Gillis’s fast-paced style consistently elicits screams and laughter in every room that he works at the Magic Castle. He fools them, but more importantly, he totally entertains them.” – Jack Goldfinger

“Brian Gillis is one of the greatest sleight of hand artists alive. His style is fast paced magic mixed with great comedy creating a show that never fails to destroy an audience. I’m with Johnny Carson “Brian Gillis is my favorite magician” – Chris Randall

“Brian Gillis performs for so many A-list celebrities that he should carry a red carpet everywhere he goes.” – Gregory Wilson

“Every time I’ve seen Brian Gillis work, he leaves his audience in astonishment. His sleight of hand is flawless and gutsy.” – Dana Daniels

Coins travel from hand-to-hand faster than anyone can see.

Several people peek at cards and, after someone thoroughly mixes the deck, the thought-of selections appear one-by-one in the strangest ways.

The world’s fastest sponge ball routine complete with an explosion of two dozen, or more, balls at the end.

Brian Gillis and Sisuepahn (pronounced Sis-sue-pawn) have fascinated and stunned audiences with sleight-of-hand, mind-blowing mentalism and impossible feats of “body magic” for over a decade. Inspired by his remarkably accurate and highly entertaining fortune-telling grandmother, Brian took up magic as a hobby as an undergrad.

After college, he taught Psychology before his transition to full-time magician, having apprenticed under the great Eddie Fechter, a man considered to be one of the greatest close-up magicians of all time. Brian was named “World’s Best Close-Up Magician for the New Millennium” on the television special The World Magic Awards.

Laotian-born Sisuepahn, known as the “Lady of Magic,” displayed a natural flair for playfulness and puzzle-solving at an early age, and has since spent thousands of hours researching and practicing mystical techniques of mind-over-matter, unseen for decades. Combining her assiduous research with techniques taught to her by one of the greatest mentalists of the century, Eddie Fields, her total mental and physical control allows her to perform completely inexplicable physical feats. From competitors for the title “World’s Strongest Man” to a 10-time world champion power lifter, Sisuepahn has proven to be impossible to lift when she imposes her will to be immovable. Her mysterious ability leaves audiences flabbergasted and howling with laughter.

If you’ve never been to a magic lecture, there’s never been a better time. Sunday, November 27th, at 7:00pm, we’re streaming Brian Gillis LIVE in a spectacular 2-hour online lecture. Watch and learn things you won’t find in any book or DVD.