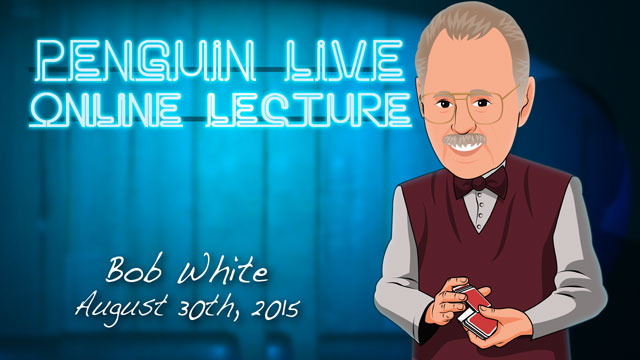 “There are only a few bona fide master magicians living in the world today, and one of them is Bob White.” – Jared Kopf

“In an era where many magicians pay lip service to Erdnase, Bob White continues to be the embodiment of that book’s teachings.” – Tom Gaudette

The Flash Double A very clean and practical method for doing the double lift. Jamy Ian Swiss said it was the “most natural, unassuming, and convincing” double lift he had ever come across.

The Fingerprint Card Trick An updated handling of the classic sucker effect that happens away from the pack. A simple, direct effect that has been in Bob’s professional repertoire for several decades.

A Simple Coin Vanish A simplified and natural method for vanishing a coin or small object. Based on Charlie Miller’s coin vanish.

The Lie Detector A great version of the lie detector plot performed with cards. This is a perfect trick to complement the Fingerprint Card Trick.

The Sponge Bunnies One of the most powerful tricks in close up magic. Bob has done this trick in every close up performance he has performed for over fifty years. A refined handling- including tips on managing the trick and presentation.

Bob White has been performing magic for over seventy years including over 40 years as a full time professional magician. Bob gave his first day-long seminar in 1996 titled It’s a Matter of Style. This seminar focused on the hallmarks of Bob’s magic: simplicity and uniformity of action. In 2005, he released his first DVD on magic, Practical Card Palming, to critical acclaim. This was followed by highly regarded DVD’s on the Chinese Linking Rings, the Cups and Balls, the Torn and Restored Tissue Paper, the Malini Egg Bag, and Card Magic.