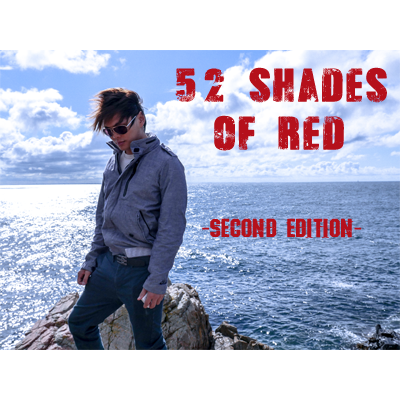 “Shin Lim’s card magic is so stunningly visual it looks like CGI special effects. His magic is fresh and inspiring. 52 shades of red is

the best routine there is.”
– Dynamo (Dynamo currently opens his stage show with 52 Shades of Red)

“Shin is a true master of deception. He’s filled with poetry and elegance in every movement. I love him.”
– Lennart Green
(Shin Lim closed the Illusionist Broadway show with this routine)

Description:
Two years ago Shin Lim released 52 Shades of Red. It has since took the world by storm. Magicians all over the world have been performing this ground breaking routine.

The greatly anticipated continuation of 52 Shades of Red is now available!

Gaffed deck and gimmicks:
A fully gaffed deck (some assembly required) and extra gimmicks needed to perform the full 52SOR routines and effects.

Instructional Streaming tutorial:
Over 3 hours of intense teaching! Shin goes over his entire act in great detail and teaches you every move, method and nuance that goes into his live performance… The priceless information included in this package has been tested through hundreds of performances worldwide.

Bonus Effects:
Shin also goes over all the effects seen in the official 52 shades trailer. Though these are “bonus” effects, these effects alone are worth the price of this trick.
*TV rights ARE included for the “bonus” effects!

Bonus Effects:
Misprint: This idea allows you to show what appears to be a misprinted card and in an instant(under your complete control) you cause the card to warp back to its normal self.

Small to Big: The magician shows a miniature deck of cards, and in an instant it vanishes and all you’re holding in your hand is a regular single playing card (an idea contributed by Chris Severson)

Multiple Change: Change the backs of a single playing card in the open 4 times. Its quick, fast, bold, and insanely visual.

Multiple cards vanish: Cause a packet of cards to either turn into just a single card or vanish altogether.

Picasso: An idea by both Tom Elderfield and Shin Lim, the magician is able to slowly paint the back of a playing card, bit by bit. Everything is done in the open and there are no angle issues.

Flap Cards: Shin Lim personally teaches you his take on the flap cards, and how he believes it’s an improved version from the classic flap cards.

Get ready to go on a journey that will change your technique, thinking, and philosophy on card magic. Explore your own path of card routining with the Second Edition of 52 Shades of Red.

Shin Lim has performed his 52 Shades Routine all over the globe. He closed “The Illusionist” Broadway show with it as well.

*Television rights for Shin Lim’s bonus effects ARE included in this package.