Reinventing The Real by Tyler Wilson 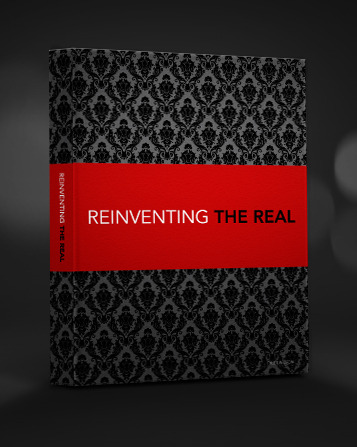 “Reinventing The Real is the best and most exciting book on close-up magic I’ve read in a long time. In it Tyler Wilson shows himself wonderfully inventive, a serious student of his craft and very funny. The only fault this book has is that I’m not publishing it.
– Stephen Minch

There are very few magic books that make me laugh on purpose. This one did. I have not met Mr. Wilson, but it is clear that he is impressively well read, and threateningly clever. Had I not read it first, this material would have fooled me. Thus, Id probably find it difficult to like him.”
– Max Maven

“Wow! Reinventing The Real has so much variety it could have been called Kamasutricks. The book is an inspiring read. It’s full of unique presentations, methods, and strong effects. Make room on your bookshelf and get ready to add to your repertoire.”
– Ray Kosby

Reinventing The Real is a well-written and well-produced book with great magic, solid methods, terrific presentations and spot on references and credits.
– Jason England

Do you hate trying to learn a trick, only to come across vague statements such as, “Patter to the audience while you perform the next seven moves…” or, “This extensive setup can be arranged while you toy with the deck…”?

So do we. That’s why Reinventing The Real leaves nothing up to guesswork. Each routine is fully scripted with humorous, compelling presentations, along with meticulous technical details describing exactly how to get in, get out, and get the most of each routine.

Ever wanted to do a color change with your mouth? Ever wanted to make ink appear, vanish, and move around on a deck with no cover and in slooow moootion?

Tyler Wilson is hailed as a creative genius, consulting with some of magics hottest names. He knows how to fool you, and hes got the chops to back it up. Penguin is excited to bring you his latest book, Reinventing The Real. This is groundbreaking material. No stone has been left unturned; not only are new plots and new methods taught, but in fact, new principles! Rarely has so much innovation been packed between two covers.

The moment you get this book, you’ll be in awe. It’s gorgeous, with some of the highest production values available. It’s even been said about the quality, “The only way for there to be a collectors edition of Reinventing The Real would be to release a new version with inferior quality, and then start calling the current one the collectors edition.”*

Once you get past the physical allure, you’ll start to appreciate the inner beauty. The material isn’t like that which you find in other books. It’s not just minor variation after minor variation. It’s refreshing, original, deeply-fooling magic. Tyler Wilson is driving magic forward. Hop in shotgun, and come along for the ride.