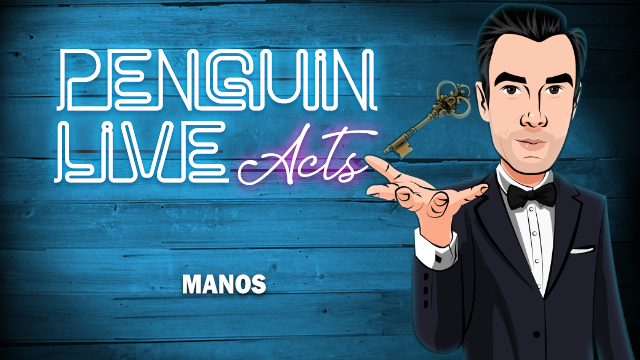 “Manos is quickly emerging as one of mentalism’s best kept secrets. His thinking is fresh, his material is powerful and his routines are always refined, ensuring that each and every piece he creates is a true worker. I can’t recommend him or his material highly enough!”– Michael Murray

“I feel fortunate to call Manos a close friend. Throughout our many interactions over the years I’ve come to appreciate that he is, first and foremost, a wonderful human being. Among many other commendable qualities, he is thoughtful, generous, and sincere. Those same attributes make him a formidable performer and creator. His lecture will no doubt reveal the immense level of

thought that he puts into every routine. It will be a privilege to see him perform effects that he’s held close to his chest for many years. And his passion for the art will be very apparent. His books V, V2, and UnVeil contain some of the best thinking that contemporary Mentalism has to offer and this lecture will continue that trend with hard-hitting, practical, and entertaining material that you’ll want to study and add to your repertoire. If you’ve not yet been exposed to this man’s mind then buckle up and take notes!”– Drew Backenstoss

“Manos is a multifaceted master of logic and presentation. His material is a pure napalm- he does all the hard work for you so that what you end up with is simple to perform while remaining enthralling to your audience. A unique entertainer and creator in every sense of the word.”– Atlas Brookings

This ACT combines the best ideas of both worlds, traditional mentalism and propless mentalism methods.

Brick Opener- The perfect Opener because it engages the whole audience in a fun game which they can play from their seats and guarantees to bring a participant up on stage without any awkward moments or hesitation. It also helps the performer build rapport with the audience and it has a killer ending that the audience will not see coming and will be sure to remember.

Postcard- 3 participants take part in this routine and embark on a mental journey with the help of the performer. This routine is a great example of how to reveal information that the participants are merely thinking of during a mind-reading demonstration.

Stegosaurus- The performer offers to give a demonstration of how mind reading works with the help of one participant. The audience is able to witness what is happening in the performer’s head during the mind-reading process. This routine offers multiple revelations of thought of information and the audience will believe that the performer can genuinely read the participant’s thoughts. This routine showcases a very believable mind reading false process.

ProMetheus- In my opinion the best “which hand” routine I have seen is Colin McLeod’s “Perfect Prediction” which can be found in Colin McLeod’s Penguin Lecture and his book Divine. This is my take on this routine that uses no gimmicks. It is a demonstration of mind reading and influence. The performer is able to locate a hidden object with no complicated procedures, read spectators in order to understand whether they are lying or not, reveal thought of words and deliver a killer prediction at the end. (with permission from Colin McLeod).

Unlock- The performer invites the whole audience to focus on a goal/ambition or desire they have and then uses an interesting presentation of the magnetic fingers effect to empower the audience to find the inner power they have in order to accomplish their goals. Then he invites an audience member on stage who he puts under a trance. The performer is able to reveal the participant’s ambitions and then invites him to imagine unlocking an imaginary door in his mind where he keeps his ambitions/desires and the potential to fulfil them. After this process, the participant is given an ordinary house key which he is able to bend at a 90-degree angle using nothing but his bare hands, in order to make sure that this door will remain unlocked.

Bonus- With this LIVE ACT, you also get over 40 pages of detailed Lecture Notes with further explanations for the entire ACT!

Unlike other magicians who started doing magic when they were 6 or 7 years old, I actually started much later than that. I was already a teenager when the magic bug bit me, but since then, I have been doing my best to make up for the lost time. Close up magic attracted me first. I started practising sleight of hand with
cards, coins etc. spending hours each day studying Daryl’s Encyclopedia of Card Sleights and Michael Ammar’s Easy to Master series.

I have to admit that in the beginning, I wasn’t interested in mentalism. I believe this was because I am genuinely a very sceptical person, and at that age, I thought that pretending to be a psychic (that’s what I thought of mentalism back then) didn’t suit my character. The first mentalism performance that grabbed my attention was by Lee Earle. Unlike what I had seen before, his routine had a more psychological and realistic aspect in its presentation. It was then that my interest in mentalism began. I studied as much as I could from various sources (Corinda, Bob Cassidy, Max Maven, Richard Osterlind to name but a few) but still exclusively performed close up magic and practised sleight of hand.

I only saw mentalism from a different perspective when Derren Brown hit the magic scene; he was unlike anyone I had seen before. Although the effects he performed were genuinely impressive, I was more amazed and fascinated by the way he presented them. Instead of just revealing a thought, this performer actually based the whole presentation around the mind reading “process”. I have to admit that from all my inspirations and influences in magic, Derren has to be the biggest and most important. The main reason is that after seeing
Derren perform, I realized that it is possible for someone who is as sceptical as I am to perform mentalism.

I am not saying that I present all my effects the same way as Derren, nor that I believe that this is the way all mentalism should be performed. I am just saying that this is what suits me personally. It also allows me to better express myself through my presentations. Fast forward 18 years and here we are. I now perform mentalism only and not sleight of hand magic. This year I am happy to be sharing my material with the rest of the community through my new book UnVeil, through the lecture I gave at MINDS in Newcastle and in the Penguin Live ACT.