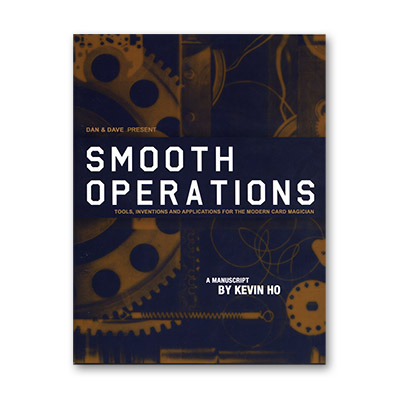 Introducing the card magic and flourishes of Kevin Ho, Smooth Operations is a 60 page book explaining an array of new material for both the curious student and seasoned pro with over a hundred photo illustrations for an enjoyable learning experience.

Kevin is a rising young Singapore-based magician with some serious talent. As a flourisher, he’s already earned a reputation as one of the best. His style is fresh, ultra smooth, and extremely visual. And his magic is no different. Learn 5 effects, 4 sleights, 3 productions and 2 flourishes in 1 kick ass manual on card magic.

Step into a world of visual madness and experience the unexpected.

Tools, Inventions and Applications for the Modern Card Magician.

Punk’d
This version of Re-Set is simple, instant, and leaves you completely clean. Imagine two four-of-a-kinds, like the four Aces and four Jacks, instantly changing places with each other, and then back again moments later.

Static 4
A quick and easy four Ace production that’s perfect for getting into any of your four card routines. It’s also one of Kevin’s favorites.

Long Division
This clever routine is fun to do and gets killer reactions.

A card is produced, equaling the value of two spectatorsí chosen cards. This single card is then visually ìstretchedî into a long card, which the spectators help split into their respective selections.

Pegasus
An insane production of any four-of-a-kind that will blow your audience away. (Includes an alternate version.)

This is definitely one of our favorite effects. It’s fast, visual, direct, and allows you to showcase beautiful sleight of hand.

PCP
Four Jacks are counted between your hands as they seem to visually change into the four Aces. (Note: If you’re tired of the remark, “Do that again”, this is not the trick to do.)

Chaser
The magician offers to demonstrate different aspects of sleight of hand. What follows is a fast-paced sequence of cards appearing, teleporting, changing, and transposing with each other in a casual, yet highly visual manner.

Raccoon
Imagine a card spinning atop the deck 540 degrees to infinity. This cool little flourish is so neat and original, it has to be seen.

Collectors Redux
In the process of finding three spectators’ selections, the four Queens (or any four-of-a-kind) are found in an insanely chaotic and visual way that only Kevin would think of.

Visa Switch
This very cool switch is open for many, many applications, of which Kevin supplies two. However, I’m sure after a little experimenting, youíll have applied it to numerous ideas of your own. All around, itís a fun little move to play with.

Fully Loaded
In this effect, Kevin explains how a deck of cards can be a deadly weapon with not only the ability to shoot single cards out of the deck, but also to produce a four-of-a-kind (Okay, it’s a really cool ace production with some fun patter.).

Conspiracy of Four
An extremely visual and fun handling of a classic plot.

Bob Change
With a light shake, a card held in the magician’s hand instantly turns into another card.

A very clever and in-your-face take on the well-known Shapeshifter change.

RePainted
A blank fan of cards is seen. With a quick wave, the faces of the cards visually appear. The method is so obvious it’s hard to believe no one has ever thought of this before. An instant classic in my book.