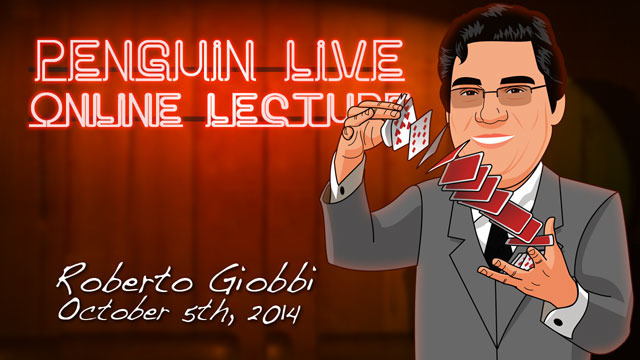 “Roberto Giobbi’s brilliant lectures are clear and pedagogical, based on immense knowledge in magic. Roberto Giobbi is a true connoisseur in many fields. He doesn’t serve you a quick meal. Rather his menu in magic begins with a tasteful starter, followed by a powerful main course and an exciting dessert. When he talks you listen and when he handles the cards he really catches your attention and creates the essence of attractive magic. Roberto Giobbi’s card work can be characterized in a few words: Elegant simplicity with economizing of moves, delicate misdirection guided by a powerful logic story.” – Lennart Green

“Roberto – You are an inspiration to thinking magicians everywhere.” – Pete McCabe

“Roberto Giobbi is the perfect combination of scholar, teacher, and performer. As a scholar he has studied the literature of card magic, examining the best effects, methods and techniques. As a teacher, he has (in his Card College series) organized this material in a logical, structured way that effectively leads the student along the path toward mastery. As a performer he knows the importance of presentation, management, and psychology and he has incorporated this information in his books. Through these accomplishments, Roberto Giobbi has become one of the most important voices of 21st Century conjuring.” – Michael Close

“I have spent a lot of time watching DVDs of many famous magicians, but have to say that you are the most interesting of all. Your style is also very different which differentiates you in a very positive way…”– Mike Sussman

“There is not a magician alive today who wouldn’t benefit from studying Mr. Giobbi…He’s kind of the King Midas of card effects. His touch on classic plots turns them to gold.” – Jeff Stone

“Your style of writing and teaching is like no one else and I truly appreciate your work.” – Mark Miller

The lecture will deal with effects, techniques and theories with playing cards for the performer who works at the table for a smaller group. This is the situation all of us, whether professionals or amateurs, find ourselves in frequently: with friends or business associates in a bar, after dinner at home, at a party as an invited guest. Clear, straightforward, strong magic that is entertaining and memorable. Briefly, this is magic for everybody, for everyday situation.

Based on the world’s foremost course in card magic, Card College, the author himself will take you on a fascinating tour through the first 4 volumes. He will demonstrate and comment on sleights and subtleties, which are neither in the books, nor on the 4-volume DVD set – this material has never been filmed before. Every principle, technique and theory is exemplified in detail in the context of commercial performance pieces, most of which are in Roberto Giobbi’s professional repertoire and which have earned him a comfortable living by performing for international audiences of all types around the globe.

Among many other things you will learn:

Plus, you’ll learn dozens of original sleights and subtleties to add to your repertoire and enhance your magic, such as:

Although the instrument used will be an ordinary deck of playing cards, the main focus is on artistic magic. Roberto Giobbi’s holistic approach to magic, well-known to readers of his best-selling books, considers the technical, psychological and dramatic aspects on which all excellent magic is founded. Many of the tricks and techniques performed and explained, albeit conceived for the close-up performer, can also be done stand-up in parlor or small stage situations.