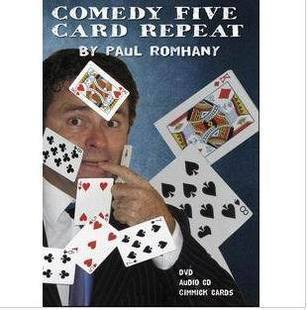 Direct from his current comedy act on cruise ships and corporate work Paul Romhany is releasing his version of FIVE CARD REPEAT.

The premise is that the magician tells the audience that he will play a CD and together they will learn the famous $100 Three Card Trick. The magician then follows along with the voice-over and that’s when the mayhem starts. Things get out of hand as the magician keeps fooling the ‘voice-over’ with little ‘climaxes’ along the way until finally the trick works.

This is FOUR minutes of SOLID entertainment from a working professional’s act. One of the most commercial routines on the market today that packs small and PLAYS BIG