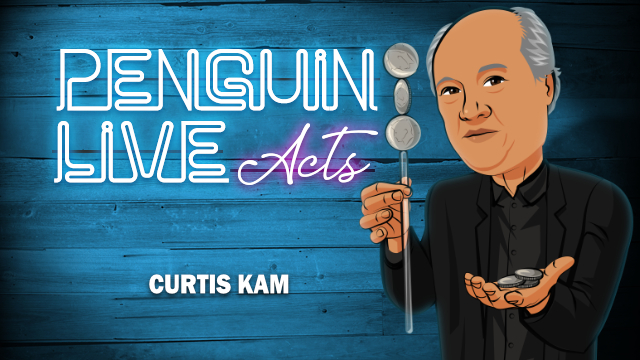 “As always, Curtis brings a devastating clarity to coin magic, providing visual moments of impossibility that are sometimes dizzying to behold. Fearless in his sleight of hand, Curtis also has the key quality that many technicians lack: an intelligent personality that is driven to entertain his audiences. Perhaps most importantly for those who are just starting to study Curtis’s material, he is a “big picture” performer: he carefully choreographs the individual moments that make up a larger routine, he recognizes the subtleties that make such moments work, and he deploys years of psychological and philosophical ruminating that allows all of the pieces to work together as a whole and create truly amazing magic.”- Kainoa Harbottle

“Curtis is my hero in coin magic. I got inspired by him a lot. He showed me his coin box routine few years ago, it changed my mind about coin box. If you want to become a “Boxer”, this is the routine you can’t miss.”- Max Li

Formal Close Up, ala the Magic Castle’s Close Up Room. Also suitable for standup and parlor.

RAINMAKER: Starts with a new way to produce a coin, establishes his character and opens a creative space for the act to exist. This is Geoff Latta’s “Trick with Three Coins” melded with other effects (it’s better if you don’t know beforehand) and ending with the release of something that coin experts have been eagerly awaiting, a new and novel illusion known only as “the Drip”.

XBOX: This is it. Never before released in its entirety, the routine that energized today’s Okito Box movement. Hailed by experts as, “the best Okito Box routine ever”, XBOX not only includes just the very best effects possible with this prop, but it improves on each of them, introduces new moves, and defines an entirely new way to handle the box.

THE TEAR: Curtis’ personal handling of the classic cigarette paper effect, which closes his close up and standup shows with a smile, a tear, and flush of inspiration. He did not want to tip this, but since it was the closing moment of his Castle Act, we convinced him he had to.

Known to magicians as the hands behind the acclaimed Palms Of Steel video series, Curtis Kam has successfully led a secret life as a professional stage performer, illusion designer, magic consultant, author, lecturer, script doctor, product reviewer, convention organizer, teacher and trial attorney. This act includes all of the material that coin experts across the country have been asking for. He’s going to tip it all!