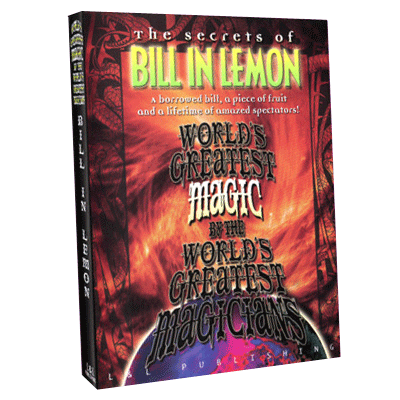 Of all the various versions of the borrowed object in the impossible place plot, the Bill in Lemon and its variations remains one of the strongest tricks in all of magic. The fact that a borrowed and marked object ends up in an organically sealed item such as a lemon or orange is truly astonishing to audiences, no matter how many times they see it.

In this volume, you’ll meet some of the world’s foremost exponents of this extraordinary feat. First off, Bill Malone explores all of the comedic possibilities of the trick in addition to offering a bullet-proof and truly mystifying method. Doc Eason is up next with his take on Steve Spill’s Bill in the Lemon, considered by many in the know to be the very best version extent, particularly for

the bar venue. Then, Fielding West shows you how to make this trick play for a stage-size audience while J. J. Sanvert turns the Card in the Lemon into a theatrical experience. Finally, Ted Lesley performs and demonstrates an easy-to-do yet baffling Bill in Lemon with a method that will delight you and thoroughly entertain your audiences.

If you’ve ever thought about putting the Bill in Lemon into your act, you’ll find five compelling reasons – and performances – on this video that will convince you to get started right away.