The Complete Works Of Derek Dingle by Richard Kaufman 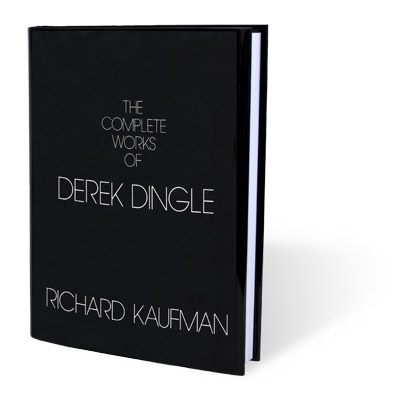 TIME magazine has called Derek Dingle, “…the greatest card manipulator extant,” and from his television appearances with Tom Snyder, Dick Cavett, Barbara Walters, and Mike Douglas to his many contributions to Genii, Apocalypse, The pallbearer’s Review, Epilogue and Innovations he has consistently proven TIME to be correct: there is no one else like Derek Dingle.

There are over 120 items with cards, coins, and cigarettes in The Complete Works Of Derek Dingle, his first book in over a decade, and it’s really two books in one. While containing the 60 or so classic routines which have already appeared in print, most of which he has substantially improved (the originals unavailable in out-of-print magazines), it also has about 60 never before

released sleights, effects, and routines. Among them:

Every nuance of technique, every line of patter, every ingredient that makes Derek’s magic so special is captured by Richard Kaufman, on of magic’s most innovative writers and illustrators. With over 11,000 words of text and 800 illustrations the very essence of Dingle’s magic is clearly taught as never before.

Tags The Complete Works Of Derek Dingle by Richard Kaufman