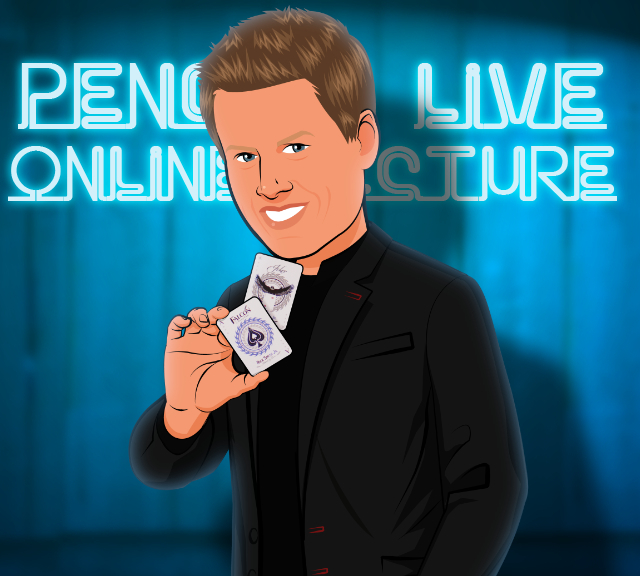 World famous Card Throwing – We will talk about the techniques I use to throw cards. We will talk about power, accuracy, how you can use this in an act, how you can use this to draw a crowd quickly, and show a few trick shots that have become popular with my recently viral video with youtube sensation Dude Perfect. We will take this even further and show different grips that can be used for soft and hard throws as well as accuracy and possible finger flicking flourishes that every magician should know.

The Martin Lewis Spinner Move- An effect to allow a playing card to pop out of the deck. I will take this very old effect and show the audience on how to use this trick for photo opportunities, card magic, all while breaking down different ways to use this effect and make it your own. I will be divulging some information that is not readily available on how to use this method in a way that is not typical that will even catch magicians off guard. We will also use this technique and show different ways of revealing a card.

Pop-up Cards- is another Finger flicking flourish that was created by Audley Walsh, popularized in the early 2000’s by Jeff Mcbride, and now one of myfeatured flicks that I use for both magic and flourishes that can be used in any stage magic act, etc.

Deep Dive into the Classic Force- There are many takes on the Classic Force, but for the first time I will go over the mechanics of the classic force showing a skill that I can fool 99% of the magicians that think they know how to perform this effect. I have studied this effect and have mastered it in a way that we can finally teach for the first time. I have never taught my rendition of the classic force on video and I feel that even although I am a card thrower I am a working magician and I feel that learning my way of performing this classic effect will be worth the price of admission.

At age 7, Rick started his career in magic by spending hours researching and developing a portfolio of illusions while other kids were playing little league and pop warner football. He tried and tested his early magic chops on friends and family, building his sleight of hand skills with every performance.
While in his teens, he stepped up his entrepreneurial side, promoting himself and his magic with flyers, business cards, and other collateral. He started being booked regularly for children’s birthday parties and family gatherings while still in high school.
After high school, Rick attended Cleveland State University to study marketing. Also an athlete, Rick played for the CSU Baseball Team where he pitched a 90-mile-per-hour fastball. One pivotal day, while kidding with fellow teammates in the locker room, Rick had been involved in a sock fight. Lacking a sock to throw, he pulled out a card from a deck that he always kept in his locker, and threw a card across the room with such speed and precision that he cut his teammate’s arm.
After graduating from CSU with a degree in marketing, he refined his new-found card throwing skill and in 2002, he threw a playing card 216 feet 4 inches, landing him international recognition and an entry in the Guinness Book of World Records.
Since then, he has been performing acts that include “doing things that no one has ever seen before”, such as his signature card-throwing feat. Shows include a myriad of different magical acts including micro magic, close up interactive magic, comedy-filled magic shows, and big Las Vegas style stage shows that include grand illusions and specialty acts.
Based in Cleveland, Ohio, Rick travels nationally performing more than 600 shows every year including award ceremonies, fund-raisers, sales meetings, corporate events, new product introductions, motivational and training seminars and humanitarian missions to third-world countries.
For the past 20 years, Rick has been amazing audiences with trademark card throwing, close up magic, sleight of hand, and stage shows with unbelievable feats of mentalism. Grand Illusions include appearances, disappearances, levitations, cutting his assistants in half and Harry Houdini’s famous metamorphosis.
Rick has had guest appearances on national television including “ABC’s Shark Tank”, “America’s Got Talent”, “The Ellen DeGeneres Show”, “Last Call with Carson Daly”, “Steve Harvey’s Big Time”, “The Wayne Brady Show”, “Ripley’s Believe it or Not!”, “Master of Champions”, “Time Warp”, “The Tonight Show” with Jay Leno and many more.