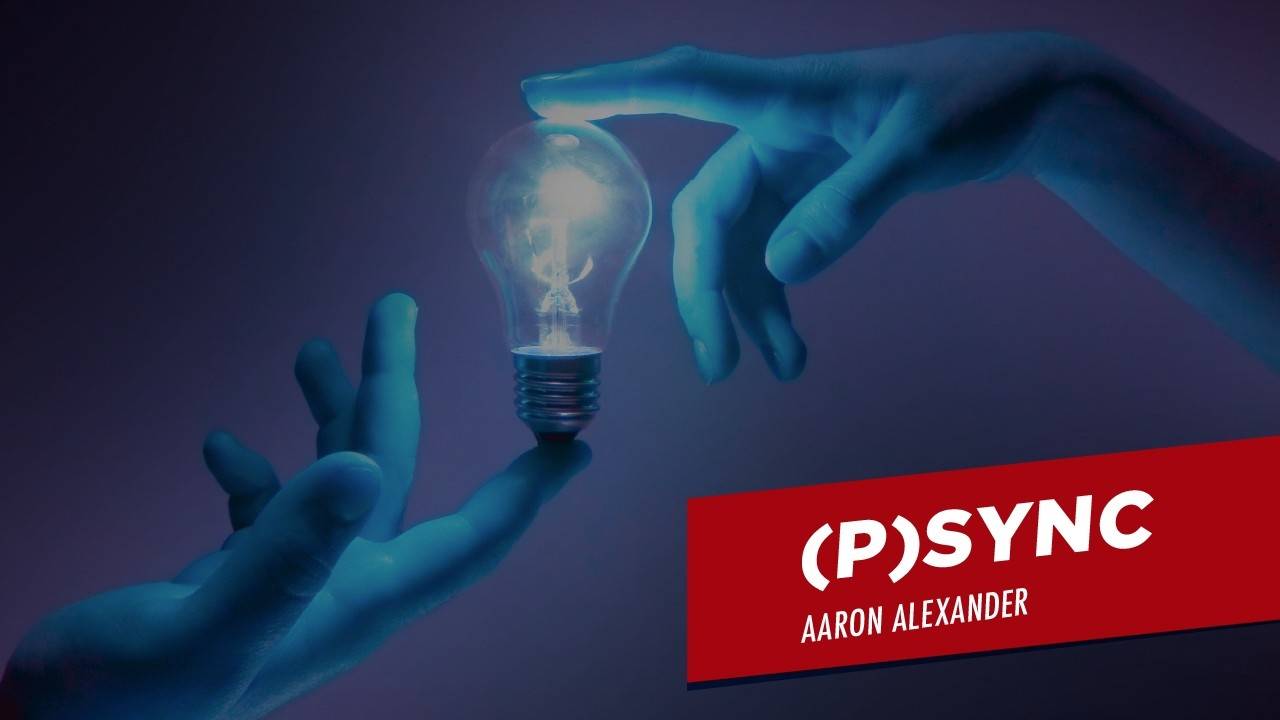 GET THIS LIFETIME SKILL NOW!

Aaron Alexander may well be the most sought after author in the mystery art community.  His work has been featured in some of the top acts in the world by mentalists, magicians, hypnotists, as well as other artists and performers.  We are incredibly excited to partner with Aaron to release his first effect in years, PSYNC.  In his own words:

This is going to be my first release for performers in about 5 years. I’m really excited. And more than a bit nervous.

I know that the world I’m sharing this with is full hype and skepticism of hype. I want this to be a completely honest, no-bullshit page that helps you decide if what lights me up about this lights you up too. And if it does, then be my guest and dive in.

I will argue that (P)SYNC is a small demonstration of how magic is real, and how we mortal humans can make magic happen.  But I won’t argue that point now, because at minimum:

You get something that looks and feels like real magic. It is reliable, requires nothing but you to perform, is easy to learn but has skill involved, so that the better you get, the more options are open to you.

The method shown in the promotional videos is not a special complex version, it is the simplest application of the method.  You will be able to learn what you see.

How it Looks (and how it plays)

In its simplest form, you start what looks like a magic trick, but soon it becomes about a real connection that you share with your participant, and that causes them to immerse in the moment in a seemingly impossible way. Suddenly you are not the magician who finds a card; their hand goes to the card completely on its own. Again, again, and again. Impossibly, even if they cannot see where their card is, their hand will find it.

Some of the best minds in magic and hypnosis have been completely gobsmacked by this thing, but it will not please everyone. I am not a magician or hypnotist so it might not match expectations. There are no complex moves. You are not trying to fool someone. It’s clever, but that’s not the point. There is no special gimmick provided. You cannot practice it in a mirror.

Years ago, I wrote two books that got quite popular among performers. Bridge was a self-contained method that demonstrated the power of an approach and get people excited for what was to come. Pygmalion Effects was longer and not about a method, but about how to make something real.

This is a similar premise. (P)sync is a completely self-contained method that is—and as a humble Canadian it hurts me to say this—absolutely fantastic. If it fits your style, you will be able to use it forever and enjoy using it forever. I should know; I created it over 10 years ago. And you can see in the video how much fun it still is.

If you love the potential shown in (P)sync and want to take it further, I also run an online course that goes deeper . Just like Bridge versus Pygmalion Effects, the longer and more elaborate one is about getting at that huge potential beyond the effect. But for most people, having this tool in their back pocket will be more than enough. And even if you want more, this is a great place to start.

What you need to perform:

Yourself and another person. That’s it.

We use cards to teach it in the video, but once you get the hang of it, you can use any physical object. Or non-object.

There is no complex memorization, you’ll no sooner forget this than you’d forget how to make a simple fried egg. You do not need to be a performer to use the principles taught.

It works based on a genuine connection and psychological principles. And if you were to blow all that somehow, you’d still be fine. It is structured to engage people in a way that some performers know is possible, but done in such a way that it is reliable and powerful and useful to anyone.

If past work is any indication, Bridge and Pygmalion Effects are used daily by top performers around the world. For more specifics, here is a review of Bridge from when I released it back in 2014. The writer has a bias as a magician and hypnotist (not everyone reading this will be), but I hope it at least gives a sense of what you are capable of.

The fact is that this stuff works because humans are fucking amazing and we forget how amazing. Let’s remind each other. This is a great way to do just that.