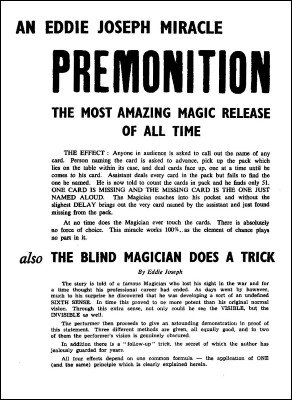 This is probably Eddie Joseph’s most proud creation.

THE EFFECT: Anyone in the audience is asked to call out the name of any card. Person naming the card is asked to advance, pick up the pack which lies on the table within its case, and deal cards face up, one at a time until he comes to his card. Assistant deals every card in the pack but fails to find the one he named. He is now told to count the cards in pack and he finds only 51. ONE CARD IS MISSING AND THE MISSING CARD IS THE ONE JUST NAMED ALOUD. The Magician reaches into his pocket and without the slightest DELAY brings out the very card named by the

assistant and just found missing from the pack.

At no time does the magician ever touch the cards. There is absolutely no force of choice. This miracle works 100%, as the element of chance plays no part in it.

Bonus effect: THE BLIND MAGICIAN DOES A TRICK

The story is told of a famous magician who lost his sight in the war and for a time thought his professional career had ended. As days went by however, much to his surprise he discovered that he was developing a sort of an undefined SIXTH SENSE. In time this proved to be more potent than his original normal vision. Through this extra sense, not only could he see the VISIBLE, but the INVISIBLE as well.

The performer then proceeds to give an astounding demonstration in proof of this statement. Three different methods are given, all equally good, and in two of them the performer’s vision is genuinely obscured.

In addition there is a “follow-up” trick, the secret of which the author has jealously guarded for years. All four effects depend on one common formula — the application of ONE (and the same) principle which is clearly explained herein.