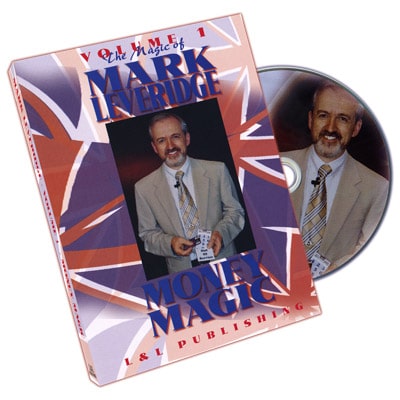 For 25 years, Mark Leveridge has been a professional magician earning his living by performing, lecturing and selling his exclusive creations to the magic world through his business, Mark Leveridge Magic. Every single year during that time, Mark has produced a range of new, original ideas and products and so has amassed a solid body of work covering close-up, stand-up, mentalism and even children’s effects. Because Mark is a performer, his magic usually has a commercial bias and his routines and methods are designed to be practical and workable. The effects on these DVDs reflect Mark’s approach and attempt to provide all viewers with magic which they will genuinely enjoy and use in the deck with a red back!

There can be no doubt that magic with money has a great appeal to lay audiences, and on this DVD, Mark performs and explains a wide range of routines using coins and bills. While some sleight of hand is, on occasion, required, there is nothing very difficult here. Mark prefers to reduce the handling to sensible, performable levels rather than simply include clever moves for the sake of it, and so viewers should find all the material revealed here accessible and fun to perform.

Effects on this DVD:

One of Mark’s very first inventions was a cleverly gimmicked envelope which looked totally normal and yet which could produce, vanish or switch anything that would fit inside. The Leveridge Envelope has since been adapted for a whole range of magic effects, and its cunning secret you will learn as part of this DVD. But that isn’t all, because over the years, Mark has made something of a feature of his work with envelopes and has come up with a number of other great innocent looking gimmicks. The Utility Switch Envelope is a small wage-type envelope which is extremely versatile and that too is revealed here for the first time on DVD. This is a fascinating collection of routines in which envelopes play a secret part-it’ll open up a whole range of new possibilities for you.

Effects on this DVD: