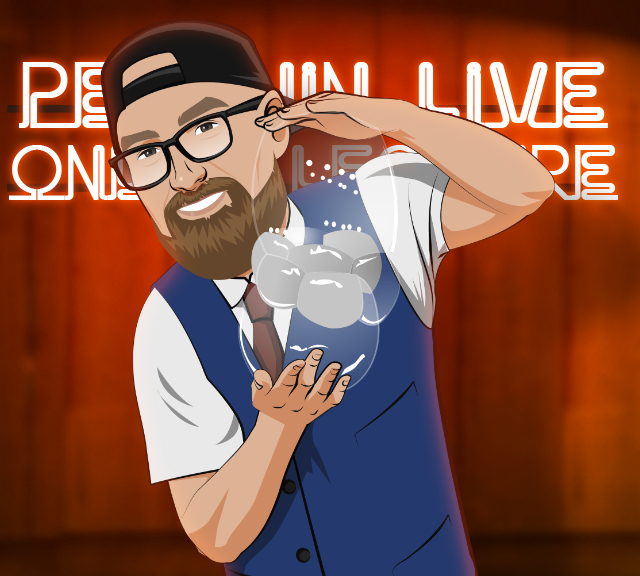 “Such brilliant, mad, obsessive thinking that has created spectacular effects. You are a true one off. Keep up the brilliant work!” – Andy Nyman

“A polar vortex has hit the magic world.” – Wayne Dobson

“Kieron is a genius.” – Fay Presto

“There’s close up magic, stage magic, and then there is Kieron’s magic. His unassuming child like persona just sets you up to blow you away with his ingenious magic and incredible methods.

He caught my attention when I first set eyes on him. I am proud of him from person to magic.”  – Your fan, Rocco

Bubbles 101- Kieron teaches bubble recipes and some basic techniques to cut down on the frustration of bursting bubbles. Then Kieron teaches you the incredible art of hand bubbles. Using nothing more than your two hands, you will learn to blow colossal bubbles that are bigger than your own head!

Once you learn the basics, Kieron will start educating you on the foundation of bubble sculpting. You’ll learn to put a bubble inside of another bubble, both using tools and just your hands; once you’ve mastered that, you’ll learn The Carousel, a beautiful sculpture of two large bubbles connected by a ring of smaller bubbles.

From there, Kieron will expand your mind with incredible new sculptures and teach you how to use fog, helium, and gas to perform a variety of awesome tricks with nothing more than soap bubbles.

Psychokinetic Bubbles- Using the power of his mind, Kieron causes two bubbles resting on the tops of wine glasses to suddenly fuse into one giant bubble.

Fire Tornado- Learn to shoot a continuous column of flame out of a bubble for long enough to roast a marshmallow!

Walking Snowman- Using a bit of fog and a bit of helium, you’ll build a three-tiered snowman that can magically walk up a slope and stand on a wine glass.

Roulette Wheel- Kieron builds a miniature casino, where a smoke-filled bubble bounces around a spinning wheel made of bubbles.

Tiny Balloon- The most charming balloon you’ll ever want to pop. Keiron’s developed a way to fill a tiny bubble full of helium and affix it to a thread creating a tiny balloon that will capture the hearts of your audience.

…and so much more!

Kieron arrived on the magic scene with a bang in the form of his ‘To The Max’ DVD, an effect which leaves the spectator with a block of ice in their hand and a true sense of astonishment. Since then, Kieron has unleashed his highly acclaimed ‘Chaotic’ DVD, the ultimate finale to any impossible card location effect in ‘Remaxed Iceolation’ and the insane effect of ‘Too Hot to Handle’.

Kieron has been awarded the Best Magic Trick Online of 2013 and 2014, has received multiple 5 star reviews and was also the War of the Wizards International Champion in 2013. In addition to this, he is one of only a handful of regurgitators in the world.

A former resident of (what was at the time) the UK’s only magic bar, Kieron has since performed and lectured both in the UK and internationally. He has consulted for the hit shows Tricked and Troy and has had many of his effects performed on TV by various magicians from all over the world. Kieron believes there is no limit to achieving a magic effect and is highly influenced by the work and ethics of Max Malini and Rocco Silano.