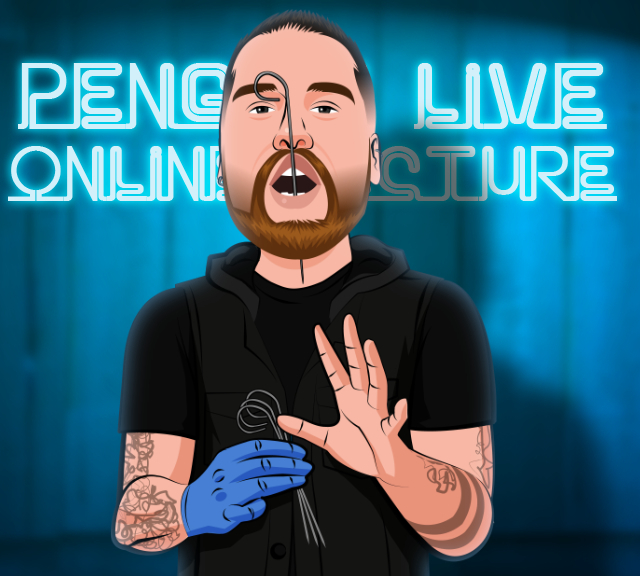 NOTE: May not be suitable for younger audiences. Viewer discretion is advised.

Kernel- After swallowing an uncooked corn kernel, Eric makes it come out of his EYE! You want to get a TON of mileage from the smallest of props.

Chopstick- A stunt that hurts to watch but it is a great impromptu stunt you can do at the dinner, . You place the sharp end of a chopstick at the front of your throat and push it into your throat

until it finally breaks. Looks painful but it isn’t.

Mental Floss- Eric pulls a balloon through his his nose and out his mouth and flosses his nasal cavity.

The Human Blockhead- The classic of all classics.

Deck Tear- Flex your superhuman strength when you tear a deck of cards in half. The spectator will try and fail but when you demonstrate your superman strength they will be completely stunned.

Instinct by Matt Mello- Eric’s favorite version on the classic Smash and Stab routine. After a spectator secretly hides a nail under 1 of 4 cups, Eric slams his hand down on 3 of the cups leaving the nail cup unharmed and his hand safe and sound. One of best party tricks of all time.

Eric Ross is an award winning Magician and Circus Sideshow Performer.
Eric specializes in Close-Up and Street Magic. He utilizes everyday objects like playing cards and borrowed coins and jewelery to create intimate miracles for laymen and celebrity spectators alike. He has traveled across the world performing his style of Street Magic for many people and corporations and has appeared on multiple television and talk shows worldwide.
Eric also performs a variety of both classic and modern Sideshow stunts, including a Fakir act in which he is piercing multiple parts of his body with stainless steel skewers (with little to no blood extracted) including, but not limited to, the center of his hand, the center of his bicep and the mandible of his jaw. He also performs many classic sideshow stunts including The Human Blockhead, Glass Eating, Glass Walking, Fire Eating & Fire Breathing, and much more!