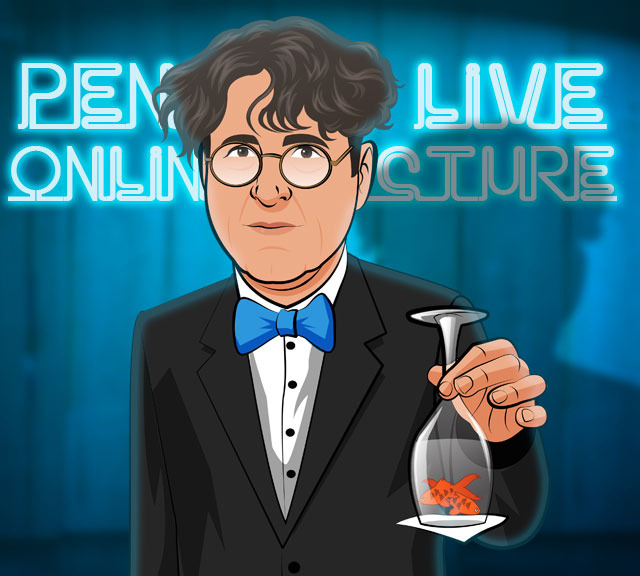 “Talk about jaws dropping: Ben’s legerdemain is a can’t-miss crowd-pleaser.” – The Globe & Mail

“The man is magic; that’s all you need to know. Minute for minute, it’s probably the sleekest, smartest, most appealing family entertainment you’ll find.” – The Toronto Star

“Dry wit, fast fingers and a serious haircut: David Ben will leave you in stitches and mystified. Somehow, he’ll manage to do both at the same time.” – Jazz FM

“David Ben has single-handedly taken the ‘ick’ out of magic.” – Eye Magazine

“David Ben’s mastery of technique is indisputable; so is the charm of his stage personality. Obviously he leaves nothing to chance, but his act is smooth, witty, and urbane in the best tradition of a master showman.” – Stage and Page

“David Ben captures audience imagination, makes them laugh and wonder. Even a skeptic would be hard-pressed to explain most of Ben’s illusions, as he lives up to the reputation as a master trickster. The audience gave Ben a standing ovation, and though he may be a pro, he seemed to appreciate it.” – SceneandHeard.ca

“A constant delight of wonder and amusement. Ben is a charming, easy-going performer who makes you feel you’re in his own living room, while dazzling the senses with his sleight of hand. It is one of those shows you can see again and again.” – Classical 96.3 FM

“And David Ben, as anyone who has followed his career will know, is a highly engaging performer. Rather than the braggadocio or self-aggrandizement of some stage magicians, Ben’s bookish, low-key approach creates the unintimidating atmosphere of a performer sharing some of his talents with a group of friends. Because Ben’s style is so understated, the effects he produces seem all the more surprising.” – Stagedoor

The Knives David Ben’s work on an effect Max Malini used to wow crowds with using nothing but two ordinary table knives. This effect was later used by Charlie Miller to great success and David has received numerous requests to tip his work on this stunning piece of magic. It’s finally released here.

Everyone’s Card, III David causes one card to change into another and then change back. He then causes a single card selected by a spectator to change into three thought of cards by people in the audience. Finally, the card is changed back into the card originally selected by the spectator. This is an amazing piece of stand up card magic that is a true lesson in magic.

Extension of Credit P. T. Selbit’s “Elongated Lady” brought up to date using credit cards. This is a cornerstone of David’s close-up repertoire. Watch as a credit card visibly stretches and then slowly reduces back to is originally size.

Spirit Card Trick A spooky yet stunning card revelation. David takes a simple plot and turns it into a stand-up masterpiece using multiple people from the audience.

Just Another Packet Trick An amazing effect in which a borrowed bill vanishes in a flash and appears in a borrowed cigarette or sugar packet. This is an effect you can carry with you and perform close up or on stage for a larger audience. Includes all of the tips and insight from years of refinement. It also includes David’s important timing on how to produce and verify the bill with maximum impact.

Ringing In The Gaff A Matrix/assembly routine performed with 3-dimensional objects (BTW there are not extra objects- just the four objects and two cards). This is the perfect after dinner effect.

Torn & Restored Cigarette Paper This is the routine that everyone is talking about. David finally tips all. If you have seen video of David featuring this incredible piece of magic in any of his one man shows you will want this lecture for this piece of magic alone. First, David takes you through Ross Bertram’s “Berttram’s Bounty.” This is a stunningly elegant version of the Torn and Restored Cigarette Paper plot that is widely overlooked. David then goes into his handling of Nate Leipzig’s “Tear-Up With A Twist.” Finally, he discusses how he ties these two pieces together to create a masterpiece.

These effects and many more are taught in an amazing lecture you will not want to miss.

Throughout the lecture David tips his mitt sharing secrets, advice, moves, and insight that has previously been held very tight and only shared with a select few. You will gain incredible insight that will make you a better magician and you will learn incredible secrets revealed for the very first time.

Educated at the University of Toronto (BA), the University of Western Ontario (LLB), and the London School of Economics (LLM), David retired from practicing tax law to pursue his passion for creativity, performing and community. As a magician, he was the sole protégé of Ross Bertram—one of the great sleight-of-hand artists of the twentieth century. In his four-decade career, David has performed throughout the United States, Canada, England and Japan.

David has made numerous television appearances and was also the subject of an award-winning documentary film “A Conjuror in the Making” that aired on Breakfast with the Arts on the A&E Network and on Adrienne Clarkson Presents on the CBC.

David is the author of six books. His first, Advantage Play, examines magicians, card cheats and psychics as models of creativity and pragmatic problem solving and was published by Key Porter Books. His second, Tricks, was a how-to book for magicians published by Squash Publications. His third book was Dai Vernon: A Biography, the first volume of a long-awaited portrait of the life and times of the most influential magician of the twentieth century. The fourth, a landmark book, Zarrow: A Lifetime of Magic, a portrait and technical retrospective of one of magic’s most revered arrangers, Herb Zarrow. David also wrote the business biography of Allan Slaight, exploring the media-mogul-turned-philanthropist’s journey who pulls the proverbial rabbit out of the hat, again and again. The most recent title is The Experts at the Card Table, an ambitious re-imagination of the pivotal card cheating book, The Expert at the Card Table by S.W. Erdnase, adding 750 photos and reordering the text to introduce “The Erdnase System for Advantage Play.”

David is also the author of several articles and essays published in several journals including the Canadian Literary Review, Genii, A Conjuror’s Magazine and Magicol: A journal of magic history and collectibles.
David is a consultant for a variety of film, television, print and theatre projects including The Shaw Festival’s production of Ragtime, Soulpepper Theatre’s production of Tom Stoppard’s Travesties and Rosencrantz and Guildenstern Are Dead, Brian Johnson’s short film based on Denis Lee’s book of poetry Yes/No, and Michael Ondaajte’s award winning novel, Divisadero.

David is the co-founder and Artistic Director of Magicana a performing arts organization and registered charity dedicated to studying and promoting magic as a performing art. He spearheaded My Magic Hands, a program designed to use the process of learning, practicing and performing magic as an introduction to creativity and the arts for underprivileged and disadvantaged children; and Senior Sorcery an inter-generational initiative to bring live theater to isolated seniors in their homes and community.

In addition to performing magic, David acts as a keynote speaker on creativity, innovation and problem solving. A feature presenter at The Walrus Talks (Performance), IdeaCity, and a two-time presenter at the Smithsonian, David has addressed a broad range of associations and corporate clients in the United States and Canada.

Previous Dropped by Madison Hagler
Next Deposit by Marcus Eddie