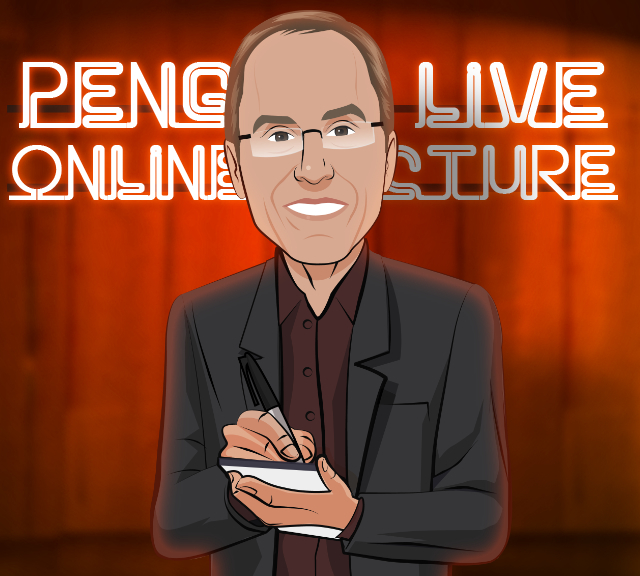 “I’ve know Christopher since many years, have seen him live in performances and lecturing – and gosh, is he good! I adore his thinking and routining immensely. One of the best pros I’ve ever seen! If you cannot learn from him, who could help you? He is not only a fantastic performer, but also a great teacher. Get his lecture as soon as possible!” -Jan Forster

“Chris’s first Penguin Live lecture is one of the elite few that I refer back to on a regular basis. He gifted us all with the total package -practical advice, brilliant thinking, refined presentations, bullet-proof methods, and entertaining real-world performance footage. If you own that lecture, the “sequel” is a no-brainer. If you don’t yet have it, do your yourself a favor and invest in both!

I’m confident you won’t be disappointed. Don’t miss this opportunity to learn from a man who has entertained and mystified more audiences than just about anyone else in the business!” -Drew Backenstoss

“Christopher Carter has been performing mentalism professionally longer than pretty much anyone. His style has always ensured his shows are fresh, engaging, and truly entertaining. The methods you’re going to learn here are not pipe dreams, this is material that has been refined in front of real audiences for decades! There are very few people I would prefer didn’t do a Penguin lecture because their stuff is too good. Christopher is one of these people. In fact having to write this to tell you that he’s amazing is most infuriating.’– Colin McLeod

“Lots of Magicians give strong, creative lectures. Some magicians are busy doing shows for good fees. Only a few performers check both of those boxes. Christopher Carter, I know first-hand, is in that elite group.”– Ken Weber

“Christopher Carter can do it all. His college shows are legend, his stage act uncanny. As a writer he can script the most brilliant shows. His inventiveness provides a lesson for all mentalists. His work ethic is untouchable, his humor is gentle. If you can learn anything from this true giant of modern mentalism, I promise it can help your career or show. I am proud to have learned from him…..but I can never duplicate his focus and inventiveness.”– Marc Salem

“Christopher Carter is one of my favorite inventors in modern mentalism. His material is among the very bet of its kind in the word—clear, direct, imaginative, hard hitting—and in the heat and pressure of several thousand live performances it has been forced into something of uncommon strength and power. I will remember the first time I saw him for the rest of my life and the more I learn about his work the more amazing it becomes. I would travel more-or-less any distance to hear him discuss his material and will be watching and studying this lecture again and again.”–Nate Staniforth

“Christopher Carter is one of the busiest mentalists working today, and there’s a good reason for that. When creating his material he leaves no stone unturned. Every single step has been meticulously thought out for maximum impact. Any time I can learn from Chris I jump at the chance, because I know what he has to offer will be gold.”– Eric Dittelman

Key-Know Revisited- A streamlined handling of T.A. Waters under-appreciated gem, Key-Know, along with a powerful presentation.

Paintball Roulette- A fun and suspenseful Russian Roulette with ungimmicked paintball guns. A staple of Christopher’s College shows for many years.

The Story of Jack Spade, New Age Detective- Not mentalism, but mentalism adjacent. A mind-reader’s take on the classic story deck, Diamond Jack.

GeoPsycho- A drawing duplication in which the drawing is never written down. It exists only in the mind of the spectator, yet the mentalist duplicates the thought-of drawing.

For almost 30 years, Christopher has been one of the busiest working mentalists in the United States. He has appeared at over 3500 college campuses and well over 1000 corporate events. He has been awarded Entertainer of the Year, Best Live Novelty Act, Best Performing Artist, and Best Male Artist by Campus Activities Magazine, and was the only performer to ever sweep all of the major awards in a single year. He has been awarded the Milbourne Christopher Award in Mentalism by the Milbourne Christopher Foundation, and the Dunninger Award by the Psychic Entertainers Association.
His material is noted for being direct, hard-hitting and fun.