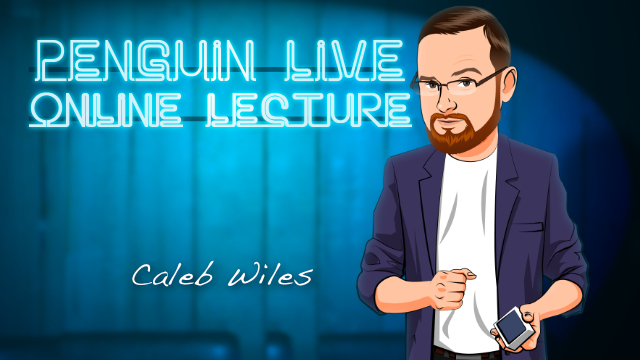 “Caleb Wiles is the real deal. His methods are devious, his presentations are clever and fun, and he’s got loads of natural ability.” – David Williamson

“Caleb is one of my favorite card creators. He creates unusual, high-impact card magic that is easy to do and astounds everyone, from laymen to magicians.” – Joshua Jay

“Caleb Wiles keeps thinking when other magicians stop, then he makes a left turn that no one knew was there.” – David Regal

“Caleb Wiles has the unparalleled ability to see the potential of principles and concepts that the rest of us may see as inert (or not see at all) and the result is just plain brilliant: Highly

commercial card magic, never difficult or unwieldy, that will fool the pants off just about everybody!” – Jack Carpenter

“I’ve been a fan of Caleb for years. His magic weaves everything great magic should have: brilliant thinking, creative presentations, and diabolical methods. I can’t wait for his Penguin Live lecture.”– John Guastaferro

Caleb has prepared a full close-up set featuring some of his pet routines. These are powerhouse effects displaying a wide-variety of card magic plots. In fact, during the entire show, only ONE trick involves the audience physically selecting cards. Each routine is suitable to be performed on its own, but Caleb has carefully woven them together to form something where the whole is greater than the sum of its parts.

Holy BLANK – A freely-named card is found to be the one isolated on the table from the very beginning… and the rest of the cards are ALL BLANK! It’s that simple, and it looks that good.

Mystery Monte – A stunning monte routine that magicians swear uses gaffed cards… but everything is completely examinable. However, if you are willing to add something extra into the mix, Caleb will teach a killer mystery card ending to leave them speechless.

Thousand Timer Card to Box – This is Caleb’s “thousand timer”… a workhorse card-to-box routine building on the brilliant ideas of Joshua Jay and John Bannon.

Travelers for Jack – This showpiece is a true lesson in clever magic construction. At every step, Caleb is miles ahead of the audience. The ending never fails to elicit gasps.

M.A.T.E. – Caleb teaches an impromptu trick from his friend Mark Tams: a coincidence effect from a shuffled deck that makes the perfect lead-in to the finale.

26! – This is, quite simply, the strongest effect Caleb has ever devised. A blockbuster closing routine that’s easy to do but finishes the show with a bang!

BONUS – Fully Automatic Card Trick – Learn ALL the details for the self-working trick that earned Caleb a featured spot on Fool Us and made Penn exclaim “You are so <&%*&#> good!”

Caleb Wiles is widely recognized as an innovator in the field of card magic. His routines are known for packing a strong punch without being difficult. His original tricks are performed by magicians all over the world, including on international television specials. In fact, he was featured twice as a performer on the CW Network television show Penn & Teller’s Fool Us. His first appearance has more than 5 million views on his YouTube channel, making it one of the most watched Fool Us tricks of all time.

Caleb started his career working three nights a week as a tableside magician at local restaurants gaining him real-world experience that continues to pay dividends. Since then, he primarily performs at corporate events and private parties where he wows audiences with sleight-of-hand and mind reading. Recently, Caleb began exploring a new approach to performing. He started a charity called Magic For A Cause that partners with non-profits to organize magic shows to help meet their fundraising goals.