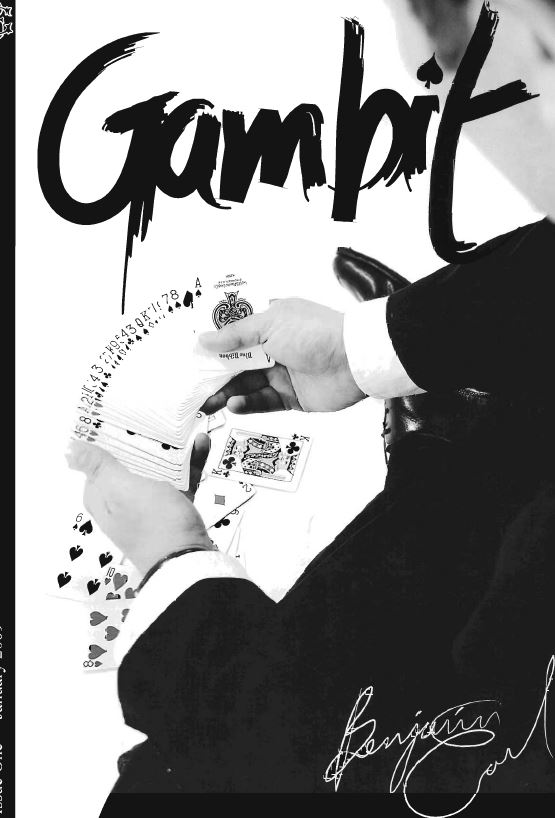 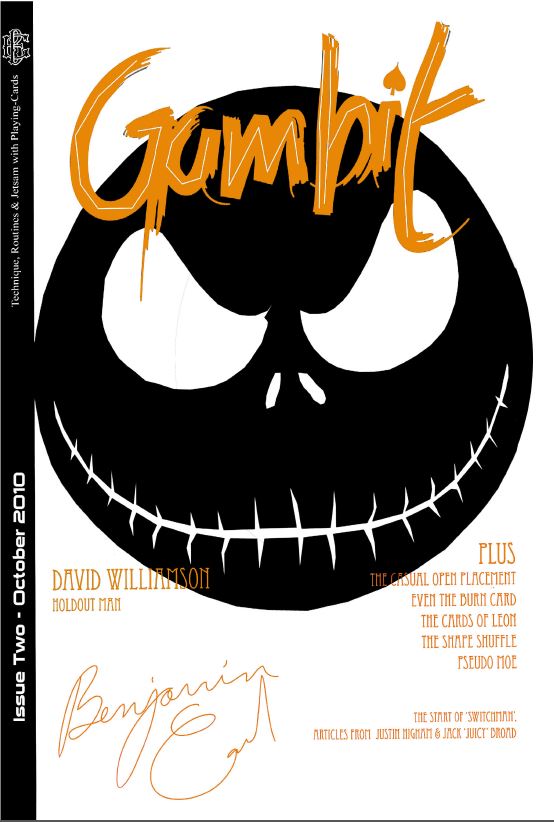 We strive to provide you with products that no other magic shop can stock; Ben Earl’s Gambit magazine is the perfect example of this. It’s an underground card magazine containing some of the highest calibre magic published this year…and we have a small quantity of them available.

Cofounder Andi Gladwin says， “Benjamin Earl is without doubt my favourite card magician. I truly believe that the techniques and effects from his Past Midnight and Skin DVDs and Gambit magazines are some of the most groundbreaking to have been published this decade.”

Gambit 2 is the second issue of Ben’s magazine and contains:

Cards of Leon: an incredibly fooling handling of Simon Aronson’s Shuffle-Bored.
Even The Burn Card: a hands-of spectator cuts the Aces where they shuffle the deck!
Casual Open Placement: a new relaxing culling technique.
The Shape Shuffle: one of the most convincing false shuffles you’ll ever learn.
Holdout Man: a contribution from THE David Williamson!
And much more， including the deck switch that got gasps at The Session!

These are very limited edition and we’ve managed to secure a few copies. They WILL sell out quickly.

Gambit Magazine was launched at theSession Conventionon January 17th 2009. It is created， written and produced by Benjamin Earl and is aimed at performers who like advanced card work. Gambit features a diversity of sleights， routines， subtleties， ideas， articles and techniques from Benjamin Earl. Gambit also contains contributions from some of the most gifted cardmen in the world.

All of the material featured within Gambit is very practical and efficient. Framing most of the effects and moves within a gambling context is a stylistic choice that will not suit everyone; however most of the material is applicable to all forms of card work; False Shuffles， False Cuts， Culls， Deals， Shifts， Deck Switches， Controls， Peek/Glimpses， Palms， psychology， presentation and more.

Previous Entropy A.C.A.A.N. by Brad Ballew
Next COMET by Akio