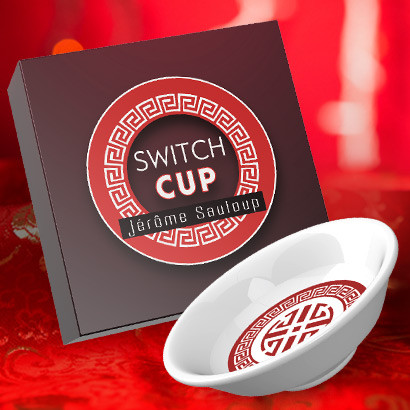 SWITCH CUP: the revolutionary and invisible change tool, which will allow you to do many effects and routines!

In 2013, Jérôme Sauloup developed a cup to be able to change a note or a piece of paper into another.

In 2020, Magic Dream and Jérôme are teaming up once again after the best sellers CHOICE and LETTERS to offer you SWITCH CUP. This new version has many advantages: larger to accommodate different media (card corner, folded card, post-it, ticket, paper, etc.), more modern design and still the same incredible operation.

Switch Cup looks just like any Asian restaurant cup people tip in, so that makes this accessory something you can’t imagine! This cup holds an evil secret, making it a tool of choice for magicians and mentalists.

Imagine being able to change one banknote into another, and then reveal the latter’s serial number without ever having unfolded it. Better yet, a piece of paper is in plain view in the cup from the start, the viewer then makes several choices and when the paper is opened, everything was predicted from the start.

And that’s not all, imagine a folded card in the SWITCH CUP lying on the table. After your best signed card routine, the card revealed in the cup is the spectator’s! IMPOSSIBLE!

Easy to use and very simple to set up, Switch Cup will never leave your case.

Change any flat object in less than half a second

Perfect for table to table

Can be used in living room or on stage conditions

8 routines included, nearly an hour of explanatory video in French or English