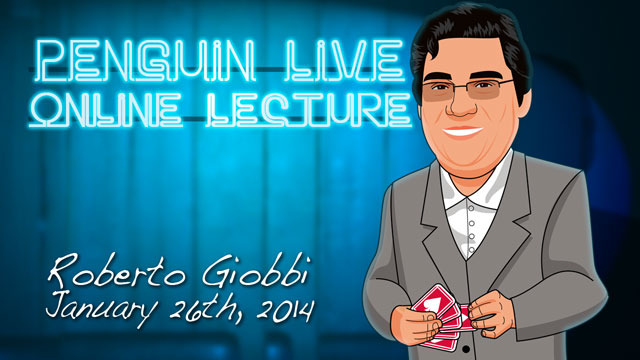 “Roberto Giobbi’s brilliant lectures are clear and pedagogical, based on immense knowledge in magic. Roberto Giobbi is a true connoisseur in many fields. He doesn’t serve you a quick meal. Rather his menu in magic begins with a tasteful starter, followed by a powerful main course and an exciting dessert. When he talks you listen and when he handles the cards he really catches your attention and creates the essence of attractive magic. Roberto Giobbi’s card work can be characterized in a few words: Elegant simplicity with economizing of moves, delicate misdirection guided by a powerful logic story.” -Lennart Green

“Roberto – You are an inspiration to thinking magicians everywhere.” -Pete McCabe

“Roberto Giobbi is the perfect combination of scholar’ teacher’ and performer. As a scholar he has studied the literature of card magic, examining the best effects, methods and techniques. As a teacher, he has (in his Card College series) organized this material in a logical, structured way that effectively leads the student along the path toward mastery. As a performer he knows the importance of presentation, management, and psychology and he has incorporated this information in his books. Through these accomplishments, Roberto Giobbi has become one of the most important voices of 2Ist Century conjuring.” -Michael Close

“There is not a magician alive today who wouldn’t benefit from studying Mr. Giobbi…He’s kind of the King Midas of card effects. His touch on classic plots turns them to gold.“ -Jeff Stone

The lecture will deal with effects, techniques and theories for the performer who works standing up before a bigger audience.

Such a situation can be a large table with too many people to perform true close-up magic, or a living room in a private setting with the audience sitting on couches and standing, or a more formal setting with several dozen people sitting in chairs and/or at small tables (Cabaret Magic), or small theaters of up to 150 people.

The lecture will be framed by the five major operating principles on which all classic card magic is based:

These techniques will be explained in detail in the context of commercial performance pieces, most of which are in Roberto Giobbi’s professional repertoire and which have earned him a comfortable living by performing for international audiences of all types around the globe.

Although the instrument used will be an ordinary deck of playing cards, the main focus is on artistic magic. Roberto Giobbi’s holistic approach to magic, well-known to readers of his best-selling books, considers the technical, psychological and dramatic aspects on which all excellent magic is founded.

Many of the tricks and techniques performed and explained, albeit conceived for the stand-up performer, can also be done close-up and sitting at a table with few people.

A spectator takes cards from a shuffled deck, and the performer knows which ones he is thinking of. An apparent mistake is corrected by an amusing and totally baffling prediction.

Discussion of how to manage an audience member, how to interact physically in parlor situations, how to stage the divination of cards so as to make them look like mind-reading, and a fresh look at predictions (not only cards!).

Teach-in session on various false shuffles retaining partial and complete order of deck apt to be used in parlor situations, such as the underused Greek Shuffle, the little known Frank Lane Shuffle, and the yet unpublished Combination Shuffle.

In the course of a game of Swiss Poker, which is played with imaginary cards, a freely named card appears in a cigarette (or other object of your choosing – you do not need to be a smoker for this trick). This is one of the effects with which Roberto Giobbi has fooled many of his colleagues at international conventions. Explained here for the first time in detail.

Discussion of the creative process behind a magic trick, with the explanation of how to practically use Mind Mapping to reach original solutions. Also, an analysis of how to combine verbal strategies, shrewd methods and sleight-of-hand.

This has been Roberto Giobbi’s finale trick in his professional stage act for the past 25 years. Revealed here for the first time with all details and subtleties gained from a lifetime of experience. 8 minutes of solid entertainment, amusing and mystifying.

The Jim Ryan classic “Vice-Versa” revisited: in the course of a trick, which is “twice as difficult” as the most difficult card trick in the world, two thought of cards are produced, and then unexpectedly change place.

Discussion of how to logically stage unusual looking procedures, how to control two cards at the same time, and how to handle the difficult and often confusing issue of transposing two cards. With special attention to the management and handling of the Double Lift & Turnover for stage.

And This IS Your Card!

A most unusual trick in which a “wrong” card oddly changes into the “correct” one – with lots of laughs, and even more mystery. This might be dubbed the “Paper Balls Over Head” of card magic.

With an in-depth discussion of the classic top change and variations thereof and special emphasis on the psychological construction of a trick, as opposed to the technical and dramatic construction.

This is the one trick from theCard College book series that has been most adopted by professionally working performers. Over the years Roberto Giobbi has added several refinements to an already brilliant trick, which he will reveal here in detail.

Discussion of the Spread Pass, the Top Card Glimpse (an easy and imperceptible method you will use for the rest of your life) and the Top Palm, as well as verbal strategies such as Miscalling, and how to combine subtlety with sleight-of-hand.

Before the proceedings start, a spectator holds a handkerchief with three prediction cards that the performer has taken from his wallet. As absurd as this may sound, these three cards turn out to be identical (including signature!) to three cards that are now chosen and signed by three spectators.

Discussion of how to have cards selected on stage and how to control them; detailed explanation of single and multiple card controls.

Dai Vernon’s Brainwave with a poetic note and using an ordinary deck of cards with special emphasis on how to stage the mental selection of a card, and how to make the invisible visible, and the impossible possible.