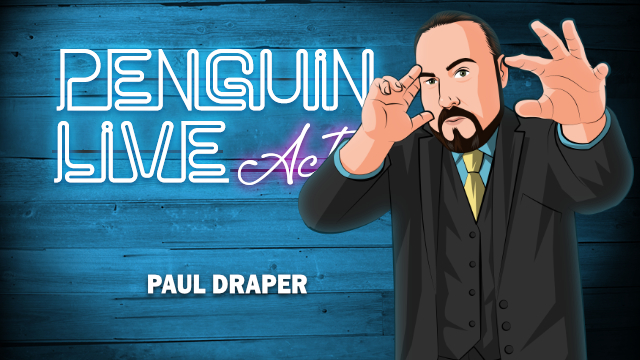 “Paul is a library of knowledge and a university of talent. It’s been my privilege to embrace his teachings. Listen carefully.“- Hannibal, Close-Up Magician and Storyteller

“My favorite thing about watching Paul Draper perform is the ease with which he combines masterful storytelling and mind-blowing magic. Paul does the impossible beautifully, and he makes it look easy. Paul is as good at teaching as he is at performing. That combination is very rare and makes his instruction invaluable for performers at every level.“- Sean Critchfield, Merlin at

the Excalibur in Las Vegas

“Paul Draper is a tremendous psychic entertainer, and every time we speak, he passes on invaluable insights regarding the performance of mentalism. In fact, I’ve seen Paul enlighten a room full of the world’s top mentalists, offering specific suggestions on how each of them, with a few tweaks here and there, could take their game to the next level. Paul is always in demand and has performed his show in numerous countries.“- Gabe Abelson, Head Monologue Writer for “Late Show with David Letterman” and Staff Writer for “The Tonight Show with Jay Leno”

Paul Draper shares an amazing half-hour stage mentalism act that you can carry in your pocket! This fantastic show can play fully surrounded, up close, on TV, or for an audience of any size. The essential carry-on act that Paul Draper takes everywhere just in case an airline loses his luggage, this is visual, funny, and playful mentalism that is easy to do, will get big reactions, and is all themed around an unforgettable mind-reading trip to Las Vegas!

Mental Roulette: The mentalist predicts ahead of time where the ball will land, and everyone is a winner!

Liar’s Poker: You can’t lie to the mentalist – I’ve got your number!

Let’s Make A Deal: Everyone walks away with cash and prizes!

First Kiss: Do you kiss and tell? The mentalist knows all – and tells all! – in this impossible revelation!

Fortune Cookies: You’ve gotta eat in Vegas! What will your fortune be? The mentalist knows!

Divining for Sin: Singing, drinking, tearing off your clothes, and… saving your soul? The perfect end to a great night in Vegas!

Paul Draper is a Comedy Mind-Reader who appears on A&E, HBO Comedy Fest at Caesar’s Palace, Hallmark, Travel, HGTV and shows like Hell’s Kitchen, Pawn Stars, Ghost Adventures, Mindfreak, and House Hunters. He has appeared with David Copperfield, Lance Burton, and Teller of Penn & Teller on the History Channel and hosted documentaries on Steven Spielberg’s Poltergeist.

In Vegas, he’s headlined for casinos including the Orleans Casino and Planet Hollywood and served for seven years as house magician at the Venetian. The International Magicians Society awarded Draper the Merlin Award for Worlds Best Corporate Performer.

Beyond his shows and lectures, Draper is frequently called upon as an expert in medical anthropology. With the Society for the Anthropology of Consciousness, Draper studies Native American ghost dancers, South American cannibals, and spiritualists.