Paul Brook – Around The Table 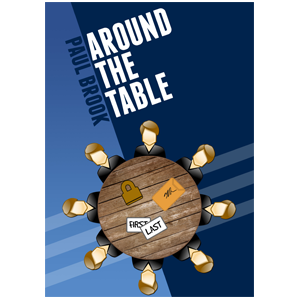 These effects are all 100% real world ‘hit the ground running’ friendly.

That means no pre-show before you perform, it means no instant stooging, no endless waffle for little pay-off and it also means that everything works 100% of the time.

Just hard-hitting material that is ‘to the point’ and mind-blowingly deceptive.

The material was designed and created for my own personal use in the banqueting entertainment environment. I don’t wear a jacket in those situations, so the effects fit into my trouser pockets with ease and each effect is an instant reset.

Each person at the table is asked to think of an unusual word and not say it. The performer writes on two cards and places them on the table writing side down. Everyone is asked to stand and one-by-one people are eliminated each naming their words aloud. When one person is left they name their word. Both cards are turned over and the first and last person’s words are written on the cards.

I’VE GOT YOUR NUMBER:

The performer drops a small envelope on the table, it is checked to be sure it is sealed and signed by a member of the table. Everyone thinks of a single digit number. A person from the table is asked to randomly select four people and choose the order they should say their number. After the numbers are named in order, the envelope is opened to find the correct numbers predicted and in order. As a kicker the ‘selector’ is asked what number she was thinking of and inside the envelope is another piece of card predicting her number.

The group is asked to secretly gather a number of their rings and after they have been mixed they are locked to a combination padlock. This is given to a member of the table to hold and is not touched by the performer. A possible combination is derived by the group via a game of ‘Chinese Whispers’ [telephone] and when the numbers are placed into the lock, it opens. Now the performer takes a ring randomly and is able to say a word or two as to who would own such a ring and then correctly pass it back to the actual owner until all the rings are returned to their rightful owners.

As mentioned above, the fact that these effects don’t require you to secretly get the cooperation of any person means that all of the people at the table experience the exact same effect and each performance will be as equally baffling for all attending.

But that’s not all, I include some of my unshared thoughts on what makes powerful table-to-table entertainment and share a number of great subtleties that will enable you to make any effect that you perform table-side more powerful and get a stronger reaction.

You could literally make a career out of just one of these three effects, but with three you can really pick the one you like best…who wants to be in a career they don’t like!