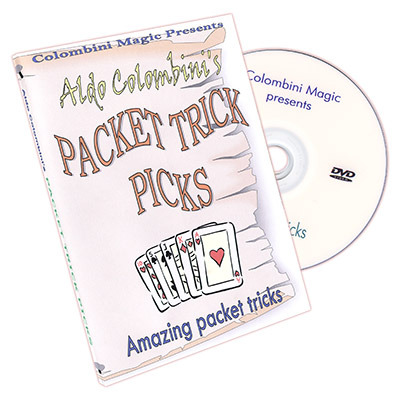 An incredible collection of packet tricks!

PREDICTION GONE WILD (Cameron Francis): A great trick. A card is selected. You show four blank cards with different names of cards on them. All of a sudden all the cards have the name of the selection. At the end the selection vanishes from the deck and appears in the packet.

BOXING ACES (Aldo Colombini): An Ace-assembly that will have their jaws dropping. Four Aces vanish from packets of cards and reappear inside the card case.

OILS WELL THAT ENDS WELL (Stephen Tucker): A version of the classic “Oil and Queens” where at the end the four Queens vanish and leave four blank-faced cards.

TRIFLE (Aldo Colombini): Two sets of four-of-a-kind, say Kings, one blue-backed and one red-backed set. One of the four Kings is freely selected by the spectator who announces its suit. The same two Kings change place twice.

KLONDYKE CATO (Richard Vollmer): Amazing simple routine. A spectator shuffles a packet of cards and you reveal how many cards are reversed and the total of their values.

A TRICK FOR JACK PARKER (Paul Gordon): Two packets of red/black cards are used. A card is selected from one packet and it turns out to be the only reversed card. The other cards change into a Royal Flush.

RED BLUES (Karl Fulves): Great packet trick where a card is FREELY selected (say the AH) and it is seen to be the only red-backed card in the packet and the only Ace in the packet.

THE WHITECHAPEL SOLUTION (Ryan Matney): Great patter story about Jack the Ripper where the spectator finally finds the devious killer!

MINDS IN SESSION (Arthur Carter): Great principle to find a different colored card in a packet of seven that can be used for many other routines.