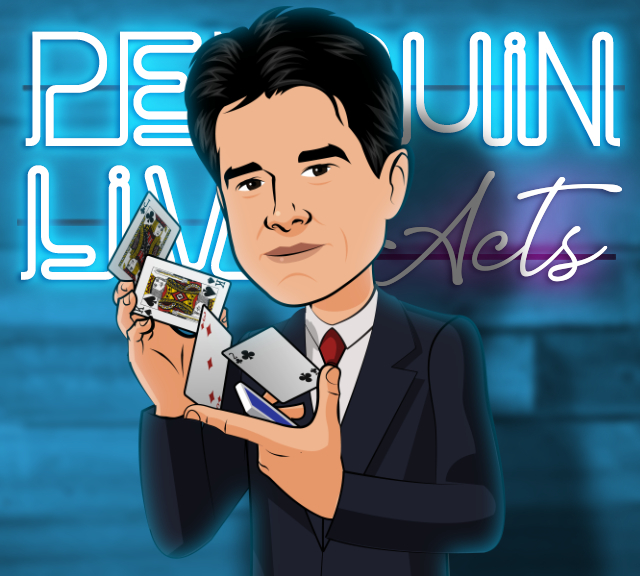 “Nathan is sharing strong solid routines that are of use to any magician, but especially those that wish to perform stand up. There is great thinking here worthy of your time” -Jon Armstrong

“It’s rare to find a full-time professional magician willing to share inner workings from their working act. Nathan Coe Marsh does it beautifully. The material is strong and nicely crafted. Everything is meticulously researched and smart. Nathan is a natural teacher, he explains every detail in an easy going, easy to follow fashion. This is strong workable material, perfectly suited for stage or parlor.” -Jeff Evason, The Evasons

“Nathan is an experienced professional who performs real-world magic for real-world audiences. I’m excited to learn he’ll be tipping some of the routines that earned him a standing-ovation at the end of a recent headline spot at the Improv I witnessed.” -Steve Bedwell

“I’ve been performing full time since I was 16, I’m 44 now. Almost all of that time has been as a working stage act, so I think I have some perspective here. Nathan Coe Marsh is putting out a Penguin Live Act! I’ve seen the material in this act. WOW!  It is fantastically well thought out material, practical, and visually interesting. Moreover it is really well footnoted and clearly explained. He’s got a mentalism piece that really plays big and is visually interesting, and a killer opener with some really nice touches. You will use this stuff.
Bonus: it is not material everyone else is doing. Beauty of this is, he’s giving you a way of thinking that you can apply to all of your work, tools to use to build on for future routines. I think that’s pretty invaluable.” -Matt DiSero

“Nathan’s magic is so strong because he puts so much work into every effect. The magic he teaches in his lectures is practical, hard-hitting and just plain fun to do! I’m a big fan of him and his work (and YOU will be, too).” -Geoff Williams

“Nathan Coe Marsh is an entertaining, professional magician whose magic is always first class. At last, I am going to learn where that shot glass came from!” -Bob Swadling

“I review a lot of magic content every year. What Nathan is sharing with the community is what he really uses for his audiences when it counts. If you are serious about performing magic in the real world, for real people, you will want to take a close look at Nathan’s work. This would be a steal at twice the price.” -Anton James, The Official Magician of Salem, Massachusetts

A Spirited Opener- The startling visible vanish of a silk followed immediately by the production of a full shotglass. This is a 1-2 punch that, in under 90 seconds, grabs the complete focus of an audience while also setting the atmosphere of fun for everything that follows.

The Chop Cup- Nathan’s stand-up chop cup routine that incorporates a Michael Kaminskas touch (with permission) in a new way to dramatically increase the impact of the final loads.

Bare-Handed- Any card called for is caught out of mid-air. The spectacle of a card sword without the cost, and Nathan’s new technique for controlling a named card from a memorized deck has many applications for both close-up and stand up (for non-memdeck users, this revelation is also powerful with a chosen card).

The Thumb Tie- Nathan’s presentation of Jay Marshall’s “Jaspernese Thumbtie” is an object lesson in how to milk the comic potential of your props and generate “playtime.”

Test Conditions Signed Bill in Orange- The result of 15 years of experimentation and hundreds of live shows. This is Nathan’s baby that came from the relentless pursuit of the most impossible version of the classic plot. The orange is in in full view, the signed bill is in full view. The bill vanishes. The orange is shown whole on every side. The signed bill truly is inside the orange. This brings down the house. Every. Single. Time.

Egg and Silk- A poignant presentation of Bev Bergeron’s classic handling of the Egg and Silk turns a “sucker trick” into a moment of emotional connection.