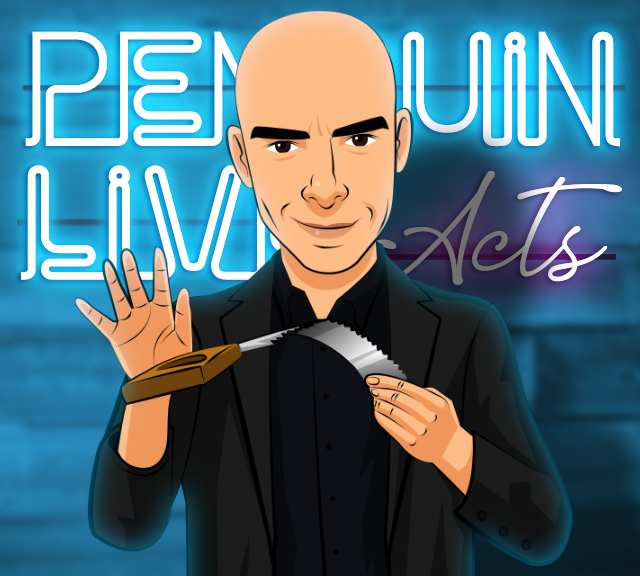 “Menny is a great creator with incredible attention to detail.” -David Blaine

“Menny is a genius.” -Dynamo

“Menny you have new ideas, things I have never seen before.” -Max Maven

Visual Magic and Mentalism that can be performed on Stage or Close-up.

Alpha Coin- A borrowed coin jumps out of a wine glass into the magician’s hand.

Mind over Plastic- A Plastic Spoon Bending Routine that Looks better than a metal spoon bending!
A super visual bending effect, where a plastic spoon, held at the fingertips, slowly and visually bends more than 90 degrees upwards.

Nail Bending Routine- Bend a large solid steel nail that can be given out for examination BEFORE & AFTER or even a souvenir.

Card in Glove- A card through window type effect that can be performed anywhere with just a deck of cards and a latex glove. A freely selected & singed card is lost in a mixed deck. The deck held by a spectator is tossed up in the air. The flying cards are hit with the magicians’ open flat palm, causing one card to penetrate the latex and appear inside the glove. It’s the selected & Singed card. A very visual effect.

Sleight of Foot- A dramatic signed card to shoe that makes for a powerful show closer.

Menny Lindenfeld AKA “The Paramentalist” (www.paramentalist.com) is an award-winning, international paranormal entertainer, inventor, and magic consultant. He is well known for his innovative and out-of-the-box thinking: blending visual mentalism & metal bending.

Lindenfeld is credited the invention of a large number of new and original magic products such as; The Ox Bender™, “Deformer™, Occultātum™, Blind Man’s Wallet – which is considered one of the best peek wallets on the market, , Hollow, Hollow 2, Self Bending Paperclip, Sealed & Sealed 2.0, Mind Over Metal, and many more…

Lindenfeld appeared on many TV shows around the globe, including ‘Penn & Teller’s Fool Us’ (season 5), on the highly rated international TV show: ‘Phenomenon – (The Next Uri Geller)’, was one of the two finalists on prime time TV show, ‘Fool The Master’ with Max Maven and has been featured on MTV, NBC, Thru-TV (USA), Channel 2 & Channel 10 (Israel), Nippon TV & Fuji TV (Japan), Kanal 1 (Turkey), and more.

Back in 2007, Lindenfeld conceptualized and founded “Trixcell” – it was the first company in the world that introduced the concept of mobile magic. In 2009, Lindenfeld’s Trixcell was nominated for “the Oscar of mobile entertainment” – the Meffys Award – for best and most original mobile content of the year.

Where can you see the greatest creators and performers share their professional magic act in front of a live audience and then teach you to do it? Only Penguin LIVE: ACTS!

Many of the ideas shared have been held back for years, and you can only learn it at Penguin LIVE: ACTS!