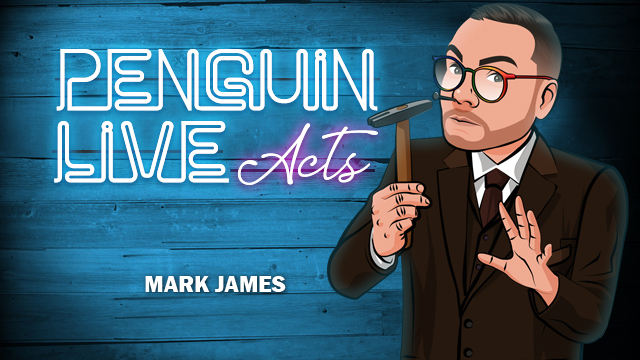 “You are one of the funniest people I’ve ever met.”- Wayne Dobson

“Very few magicians on the planet have the talent you have.”- Richard Sanders

“Mark is a real crowd pleaser. His magic is terrific and his comedy is for everyone. A real magic star on the rise.”- Michael Finney

Fire Eating– Mark’s flashy fire eating opener gets the show to a flying start. Uses two torches and packs a bunch of laughs!

Chop Cup- Mark’s handling of the classic effect culminates in the production of a lemon and orange. Lot’s of audience participation without needing to bring anyone on stage.

Silk To Egg- Mark tips the real work on this classic of magic. A handkerchief turns into an egg but then the audience are immediately let in on the secret. The magician is using a fake egg. The trick ends with a big surprise when the audience find out the egg is real.

String Theory- Using the ‘Wisdom Of The Crowd’ theory, the audience is asked to guess the length of a ball of string. After calculating the exact average of their guesses, they’re astonishing to find out they were right.

Multiple Selection- Mark’s stage handling of the multiple card revelation plot. Seven cards are selected by the audience, lost into the deck and then found in increasingly impressive ways.

Word Box- Mark’s unusual second half opener is a blindfolded book test. Used to open his show at the Magic Castle in 2019, Mark enters already wearing the blindfold and performs a 3 word book test with the Bird Box novel. Each word is found with a hugely surprising but logical ending.

Human Blockhead- Mark gives his fun script and routine for the Human Blockhead sideshow stunt. This NEVR fails to get huge reactions.

Half Dyed Silk- Using all the same moves you learned from the Silk To Egg, Mark will teach you his logical and easy handling of the Silk To Egg. This routine makes total sense and handles like a dream.

Imagining Oz- With great thanks to Jim Steinmeyer, Mark teaches his psychological handling of a stage routine that can be performed with NO props. The audience all close their eyes and are guided through a story in the land of Oz. They’re then surprised to find that they were all thinking of the same character by the end. This is a fun routine with a VERY different vibe to anything in your act right now. It’s the perfect piece to change the pace or create some theatricality in your act.

Cigar Boxes- Mark showcases his cigar box juggling closer and gives some basic instruction on learning the routine. He also uses this as a jumping off point to discuss the theory behind finding and incorporating originality and original props in your act.

PLUS- Mark also shares tips on running your own show music, building a structured act, and how to engage an audience to give them a truly memorable experience

Mark James has worked professionally for over 15 years, on land and at sea in over 40 countries worldwide. He combines expert sleight of hand magic with comedy, juggling and other vaudevillian variety skills to create a unique and amazing show. Mark regularly performs at The World Famous Magic Castle in Hollywood, House Of Cards in Nashville and The
Chicago Magic Lounge as well as providing magic on The Orient Express.