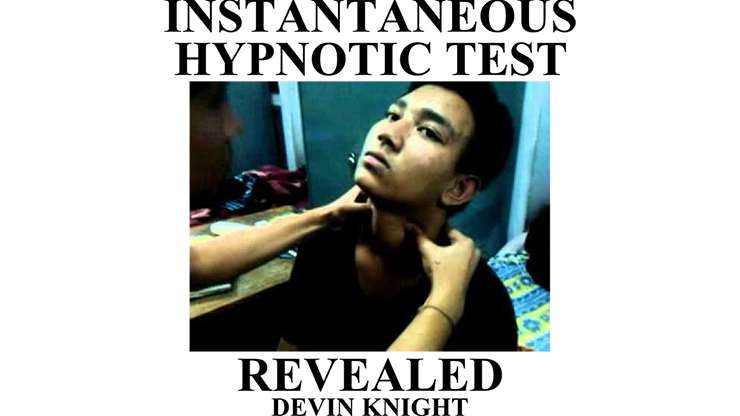 You don’t have to be a real hypnotist to do this effect! Any magician or mentalist can apparently hypnotize anyone 100% of the time, even hardened skeptics. The famous stage magician, John Calvert, used this effect regularly in his big touring magic show.

Devin Knight touched upon this effect briefly in another book; however, he did not go into the amount of detail contained within this release. This book has the most detailed information about this effect ever released. This secret was released by Del-Ardo, Joseph Ovette and Nelson Enterprises. Devin Knight has taken the best information from all these releases and made them into this new expanded release with his added thoughts.

How often have you had some skeptic remark, “I’d like to see you hypnotize me?” How often have you prayed that you might have some means or method to hold your own? The secret method of placing any subject under hypnosis instantly has been carefully guarded and known only to a limited few. It is a practical and reliable method of inducing sleep by nerve pressure, blood control and suggestion. May be performed with a high degree of success, under the most adverse conditions. This method requires less than two minutes to place the subject under complete control.

Used extensively, as the opening test by many stage hypnotists, and always sure of results. Not suitable for other hypnotic experiments while under this influence, that remains about 8 minutes. This method has sold upward to one thousand dollars. This secret is even used by modern-day fake faith healers. Many use this secret to knock people out causing them to fall to the floor claiming they were slayed by the holy spirit. If you ever wondered how they do it, the method is revealed here.

SOLD FOR EDUCATIONAL PURPOSES ONLY. This PDF is being released for historical reference and for informational purposes only. Everything in the PDF works and has been used by famous performers. However, the method revealed in this book could be dangerous to some individuals and Devin Knight does not recommend you try anything in this PDF. The secret is being revealed for the curious who wonder how such a thing is possible and to increase your hypnosis knowledge. Use the information in this PDF at your own risk. Neither the author nor distributor is liable for any bodily harm that may come from misuse of the information in this eBook.